For an individual who has made an outstanding, long-term and internationally-recognised contribution to their field of endeavour. 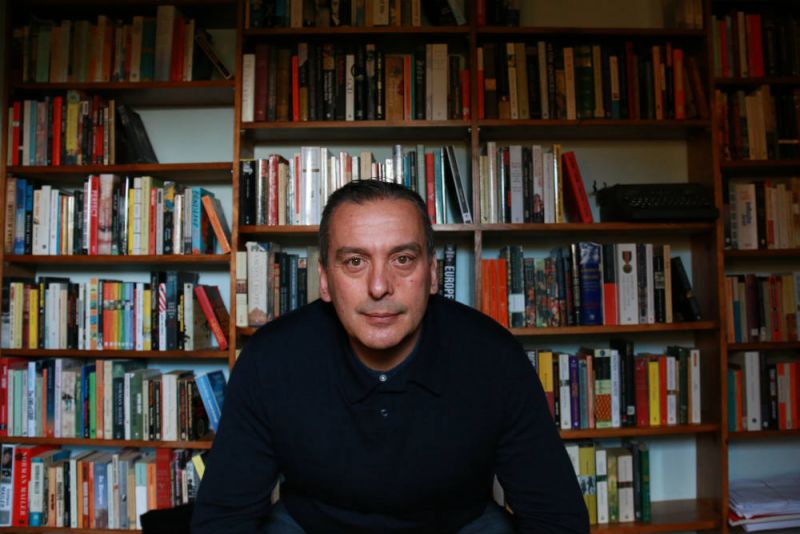 Christos Tsiolkas is a Melbourne-based playwright, essayist, film critic, and award-winning author of six novels, and the short story collection Merciless Gods. He also wrote the monograph On Patrick White for the Writers on Writers series, and co-authored the dialogue Jump Cuts: An Autobiography with Sasha Soldatow.

His works have been adapted to both the big and small screens. His debut novel Loaded (1995) was made into the feature film Head-On directed by Ana Kokkinos and starring Alex Dimitriades. His third novel Dead Europe, which won The Age Book of the Year fiction award, was also adapted for cinema by Tony Krawitz.

His 2008 novel The Slap is possibly his best known, taking as its starting point a suburban barbecue in which a man slaps someone else’s child, and exploring the effects it has on the families who witnessed it. The book won the Commonwealth Writer’s Prize and was made into an ABC mini-series, and was then adapted for an American audience into a mini-series starring Peter Sarsgaard, Uma Thurman and Thandie Newton. Barracuda (2013) was also adapted as a mini-series, directed by Robert Connelly.

Christos has been shortlisted for the Miles Franklin Literary Award, longlisted for the Man Booker Prize and been awarded the Australian Literary Society Gold Medal. His most recent novel, Damascus, won the 2020 Victorian Premier’s Prize for Fiction. Christos’s work has been published extensively overseas as well as in Australia, and The Slap has been translated into 22 other languages.

Christos is also well known for his advocacy on queer issues and on behalf of the migrant and refugee community, specifically through his journalism. He has been a Cultural Ambassador for the Asylum Seeker Resource Centre since 2013 and is also a patron of Writers Victoria.

In his own words

I fell in love with reading from a very young age and I think that it is this love of books that inevitably led me to becoming a writer. I think it is true for all writers. I was very fortunate in that – being migrants to this country – my parents were so proud and encouraging of my reading. They sacrificed to give me an education that wasn’t possible for them back in their homeland. Dad would always buy me two books on Thursday, which was payday when I was a child; and as he couldn’t read English, he’d buy me anything off the bargain table: Dickens, Austen but also Harold Robbins, Henry Miller. It was a real gift. It taught me from a young age to read eclectically; and it also taught me that reading wasn’t only entertainment, that sometimes you had to work hard for the real rewards. From my mother I inherited my love of cinema. That splendid art has been crucial in inspiring me as a writer, to think of language as both the word itself but also the image.

Inspiration comes from the most unexpected places. Something you see outside a train window. A line of poetry. The world inspires and enters non-fiction whereas I think in fiction the inspiration is more tangential. I mean by this that I am more consciously musing and thinking on themes and questions when I approach an essay. But fiction comes from a more dream-like state. Not necessarily the unconscious itself, though dreams can inspire; but more a kind of daydreaming that is necessary to any artist. Doris Lessing used the word “fugging” and I think that is absolutely perfect word for that experience. You can be in that fugging state looking out the study window; or on a walk; or doing laps at the pool.  It’s our access to the netherworld.

I think I am very fortunate to have found a vocation in which I can work through doubt, confusion, sadness and disappointment. Fiction can accommodate questions and uncertainty, and it can also imagine futures and alternatives. I can put rage and melancholy into my work, explore the shadows, but emerge into real life and shrug it off.

The greatest challenge for any artist is discipline. It is only by doing the work, diligently sitting down at the desk and writing, that you learn the craft of writing. There is talent, I do believe that. But talent isn’t enough for the craft. I describe writing as the apprenticeship that never ends. One of the things you have to learn is how to separate the world you create from the real world you live in. Again, I think you come to understand this through discipline, approaching writing as work, as labour.  If you don’t learn this truth, then I think you are in danger of betraying those you love and care for in the real world (let’s call it the non-writing world).

Self-doubt can be lacerating and so often one of the greatest challenges. Again, I have found that it is only by sitting down at the desk – for me I have committed to at least a 1500-word limit a day for the last twenty-five years – that one can wrestle and beat that demon of self-doubt. It will return, it’s never truly vanquished, but I do think you can forget it when lost in the work. Envy too is a demon and a challenge. You have to acknowledge it and then ridicule it, learn to laugh at yourself.

It’s a genuinely humbling thing to have my work recognised by an institution where I first dived into philosophy and politics and the imagination, where I first explored the challenge of becoming adult, where I met so many of my friends (and many people I met in my student years remain friends). My partner was a student at the University of Melbourne.

All that is important, and I am deeply grateful for it, but it is the sacrifice of my parents that I want to honour in this award. I’ve been thinking a lot about sacrifice in this bizarre year of 2020 that began with fire and then has been dominated by the astounding changes wrought by the COVID-19 pandemic. I think those working-class migrant and refugee generations have so much teach us about fortitude, about resilience, and about gratitude. My parents, like so many of their peers, witnessed hardships that are unimaginable to my generation. My good fortune, which includes this award and this recognition, was made possible by their commitment and their sacrifice.

I was seventeen, and it was my first year at Melbourne Uni, and one day my Uncle Kosta dropped me off. He parked on Elgin Street, pointed up to one of the buildings, and then said to me, “I helped build that, I was a labourer on that site.” He gave me a light, playful slap on the cheek. “We’re proud of you being the first of our children to be here, Christo,” he said, “but don’t ever forget where you came from.” He then laughed, gave me a kiss goodbye, and said, “Go, go off and be a bloody scholar!”

I want to say thank you to that generation for literally building this nation, laying all these foundations that we now take for granted. This is a real honour.