The preservation of a valuable work of modern architecture led by a research fellow at the Grimwade Centre for Cultural Materials Conservation has received an Honourable Mention at the 2019 UNESCO Asia-Pacific Awards for Cultural Heritage Conservation. 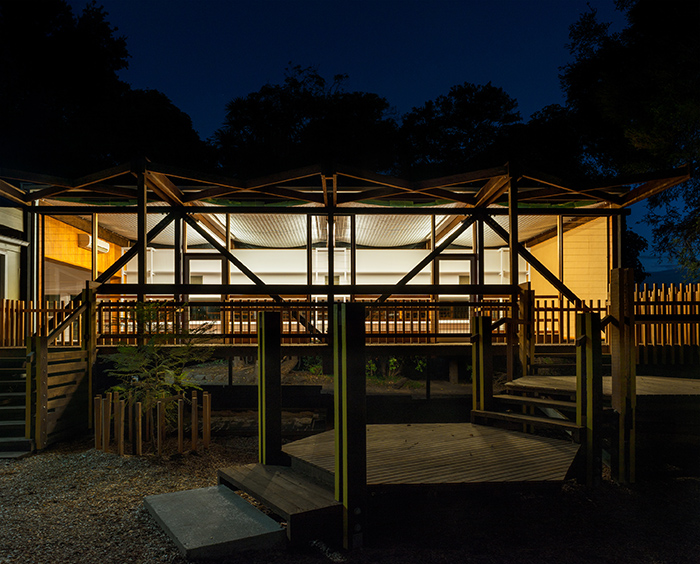 Gina Levenspiel, Miegunyah Research Fellow at the Grimwade Centre, led the project at Preshil Margaret Lyttle Memorial School, Kew, to rebuild the 5s classroom which is heritage-listed for its significance to the people of Victoria.

It is the first valuable work of modern architecture in Australia to be systematically rebuilt and measured.

The classroom was originally designed in 1963 by two of Melbourne’s prominent modernists, architect Kevin Borland and structural engineer William Irwin. It is one of seven buildings on the site for which Borland was awarded the Royal Australian Institute of Architects Victorian Chapter Bronze Medal in 1972.

Uniquely, the school is the nation’s earliest example of a learning environment where classrooms have been architecturally designed in collaboration with young children.

The degradation of the engineered wooden structure meant that it was necessary to rebuild the classroom in full, which posed a unique set of challenges for Levenspiel and her colleagues.

"The work involved the replacement of all fabric, retaining only a select number of original components to achieve dimensional accuracy. Our aim was to optimize the replica’s life cycle and durability. All of our decisions were rigorously controlled by evidence‐based processes which are fully documented and archived to support the second cycle of replication which is anticipated in 2118," she said.

She was delighted that the project was recognised by UNESCO and commended the school’s custodianship of its heritage assets and the skilled building team led by Mr Bruce Dickey of Sixty-Third Evolution Pty Ltd.

"In the Asia-Pacific region over the past two decades we have seen the emergence of new and authentic processes in cultural materials conservation that contrast to the nineteenth-century British model of creative adaptation. I am very pleased that architectural preservation is now part of this forward-thinking shift."

Preshil Principal Marilyn Smith emphasised that the architectural values of the classroom had been tested by 55 cycles of 5-year old children since 1964.

"Our job was to enable twenty-first century learners to ask different questions of the same building. We made the decision to replicate the original classroom and transmit its full pedagogical potential to future generations of students and educationalists, rather than continue with the reactive maintenance of the old building," she said.

Accepting the UNESCO award on behalf of Preshil at the ceremony was Dato' Dr Lim Huat Bee, Honorary Consul of the Australian Consulate in Penang.