The Melbourne-born International Campaign to Abolish Nuclear Weapons (ICAN) was awarded the Nobel Peace Prize in October for its efforts to achieve a treaty prohibiting nuclear weapons. For Bachelor of Arts alumnus Tim Wright (BA, LLB 2009), ICAN's Treaty Coordinator, it was the culmination of a decade's advocacy. 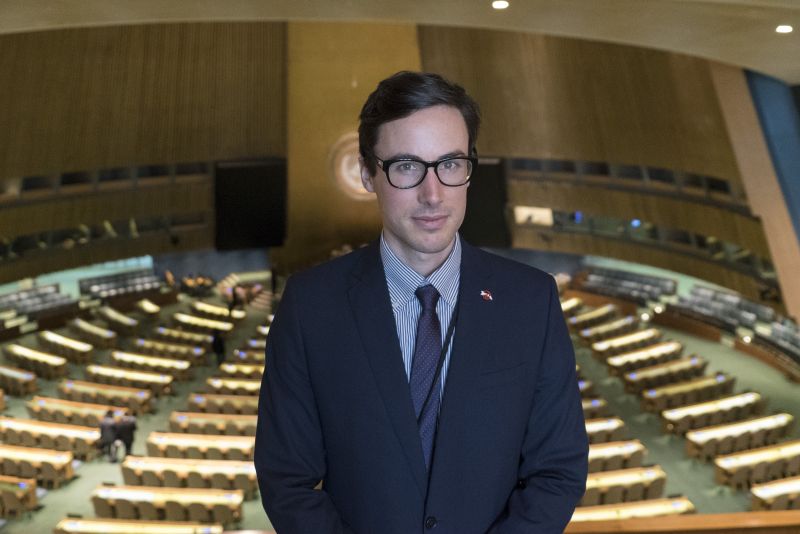 Ten minutes before the Nobel committee was due to announce the 2017 Peace Prize, Tim Wright received a text message from his colleague in Geneva: they had won.

The BBC was on the phone to Wright before the announcement was over. The ICAN website crashed within minutes.

Wright's friends joined him in his Melbourne apartment to toast the win and sat silently around the table while he conducted Skype interviews with the ABC and to the United States.

"Suddenly we were in extraordinary demand," Wright says.

"As a campaign this is exactly what we wanted, yet it was quite overwhelming."

From humble beginnings in Melbourne in 2007, ICAN has grown into an international coalition of non-government organisations and is coordinating the global effort towards nuclear disarmament. It has received the support of thousands of volunteers over the life of the campaign and yet the operation remains lean. Wright, who began volunteering with ICAN while he was a student at the University, is one of only five full-time staff members globally.

The team was instrumental in establishing the Treaty on the Prohibition of Nuclear Weapons, which 122 countries – two-thirds of the world's governments – voted to adopt in July 2017.

The idea behind the treaty had been simple enough, according to Wright. There were conventions outlawing chemical and biological weapons, as well as landmines and cluster munitions, but none prohibiting "the very worst weapons of all".

"They clearly violate the right to health, the right to life – almost every human right is affected by their use. I think it's a critical human rights issue and yet nuclear weapons are still seen in some circles as legitimate."

Achieving a treaty was no easy feat, with the weapons entrenched in the security policies of the 'permanent five' nations on the United Nations Security Council. ICAN set out first to reframe the debate into one that highlighted the humanitarian consequences of nuclear weapons.

"So much of the discourse [around the weapons] was an abstraction about power relations, instead of what the weapons actually do to people and the environment when they are used," Wright says.

Wright and his team worked to persuade countries to endorse the humanitarian pledge – a commitment to stigmatise, prohibit and eliminate nuclear weapons. They began by meeting with diplomats from smaller countries who had not been particularly engaged with disarmament negotiations, and progress was often slow.

Sometimes you wouldn't see results for months, but then all of a sudden you would see these diplomats make speeches in the UN General Assembly about disarmament when they hadn't spoken on it in years, if at all.

The humanitarian pledge received the signatures of more than 100 countries, which led to a resolution being adopted by the UN General Assembly to start negotiations on a nuclear treaty - the first such discussions in more than 20 years.

The treaty builds on the foundations of others that have come before - treaties on nuclear non-proliferation, nuclear weapon-free zones and a comprehensive test ban - but seeks for the first time to categorically ban their existence.

"It's a very interesting treaty in the way it's drafted," Professor Charlesworth says, noting the "very concrete provisions" included in the treaty around issues such as victim assistance and environmental remediation.

"It deals with issues that have been left uncertain in international law."

While Wright credits his legal training for allowing him to navigate the technical aspects of the treaty discussions, his experiences on the campaign trail have tested him in a variety of other ways.

Back in 2007, Wright was about to embark on a long backpacking trip throughout Africa when a colleague persuaded him to take ICAN's message with him.

"It was intimidating but an extraordinary experience for me and a great way to begin my involvement in this work," he says.

Every country I went to in Africa I met with at least one or two academics or campaigners or people in the foreign ministries.

"It meant I had to pack slightly respectable-looking clothing. I think I was the only backpacker with a suit."

Later, on his first official posting after graduation, Wright was based in New York and tasked with calling diplomatic missions to discuss the campaign and the idea of the treaty.

"I felt like a telemarketer at times," he says. "I would say the same thing over and over."

"But it was this kind of work that allowed us to achieve the treaty."

By the time the treaty negotiations were underway, ICAN had become a well-oiled campaign machine. At the height of negotiations, if the campaign needed to disseminate a particular message, the team could speak with 150 governments in a day.

"That's how we won the treaty – we drowned out the voices of our opponents," Wright says.

We showed that the nuclear-free nations were a force to be reckoned with.

But the work is far from over. The treaty now requires 50 countries to sign and ratify it before it comes into force. Wright will coordinate ICAN's international efforts to get nations on board. With the notable absence of the nuclear powers and their allies from the discussions thus far, there's no telling how long this could take.

According to Professor Charlesworth, treaties in the field of arms control have a mixed history of success.

"Some treaties, from the moment they're open for signature until they finally come into force with the required number of treaty ratifications, they can take a decade or more," she says.

"But there are some treaties that started out as idealistic, like the landmines convention. Even though there was a lot of resistance to that, that’s been a very successful convention."

ICAN is up to the challenge ahead.

"We think that with enough pressure from the rest of the international community and with changes in government in certain countries we will see some of the nuclear-armed states come on board this treaty," Wright says.

Even then, Wright and the ICAN team have their sights set on the bigger picture.

"The treaty is just one part of it – the elimination of nuclear weapons altogether is the goal."

This article has been republished from MLS News, Issue 19, May 2018, produced by Melbourne Law School.