From the footy field to bustling Beijing: Bridget Barker is named a Schwarzman Scholar

Bridget Barker is the Diversity and Inclusion Manager at North Melbourne Football Club, and is currently studying the Master of Public Policy and Management at The University of Melbourne. She was recently named a Schwarzman Scholar, which is a highly competitive program which offers successful students the opportunity to complete a one-year Masters in Global Affairs at Tsinghua University in Beijing.

Inspired by the Rhodes Scholarship, the Schwarzman Scholars program was created in 2015 in response to the geopolitical landscape of the 21st Century, and is designed to prepare the next generation of global leaders.

We caught up with Bridget at North Melbourne Football Club to find out more.

How did you find out about the Schwarzman Scholars Program? And what made you apply?

The Schwarzman Scholars Program was an opportunity which popped up in my University email. What drew me in was its emphasis on leadership development and that it is in China specifically to give people from Western backgrounds a deeper understanding of China.

What is your connection to China?

It sounds fairly left field as I haven’t done any studies on China and haven't been to China, but I am interested in diversity and inclusion more broadly. I have worked with Indigenous Australians and African migrant communities through my work at North Melbourne.

I recognize that China's influence in the next 50-100 years on the rest of the world will be greater than it ever has been. Whilst I don’t know much about China yet, I would love to learn about it.

What do you hope to get out of your year at Tsinghua University in Beijing?

What I hear from past participants and people in the program are the relationships with the other scholars are so important. Being one of five Australians is exciting but also there are so many impressive young people from all over the world in the program, so I’m looking forward to building a global network.

How will you go with the language difference? Have you taken classes?

I definitely need to touch up on my Mandarin. In fact I don’t know any so this is super exciting. While the units will be predominantly taught in English, we are required to do a subject in Mandarin studies which happens in the first half of the course. I don’t want to just live in the four walls of the University, I want to get out there as much as I can.

What are you looking forward to most about living in Beijing?

I've heard from others that Beijing is dynamic. It’s cosmopolitan but with significant historical links and there's a lot going on all the time. I think just the experience of living in a different culture and different city is what I'm looking forward to most, as it is something I have never done before.

Why did you decide to undertake a Master of Public Policy and Management program?

I went back to studying the Master of Public Policy and Management at the end of 2016. Working in a football club and studying public policy don't sound like they go hand-in-hand, but The University of Melbourne program is multidisciplinary with lots of inputs from different departments. I am interested in the ability to influence social change through policy. At North Melbourne Football Club (NMFC), we're building a Gender Equality strategy at the moment so understanding governance frameworks, policy design and implementation from my studies has been invaluable to my practical work here.

Following the completion of the scholarship program (and your MPPM degree), where would you like to take your career?

My interest in sport, gender equality and women's sport is centred around social change. I imagine I'll hopefully have a whole lot of doors open as a result of the program, and I'm particularly interested in the intersections between non-for-profits, business and government.

There is a lack of collaboration between all three on social change, so I look forward to finding opportunities in a progressive consultancy group or a social enterprise which has the capacity to facilitate those positive relationships. 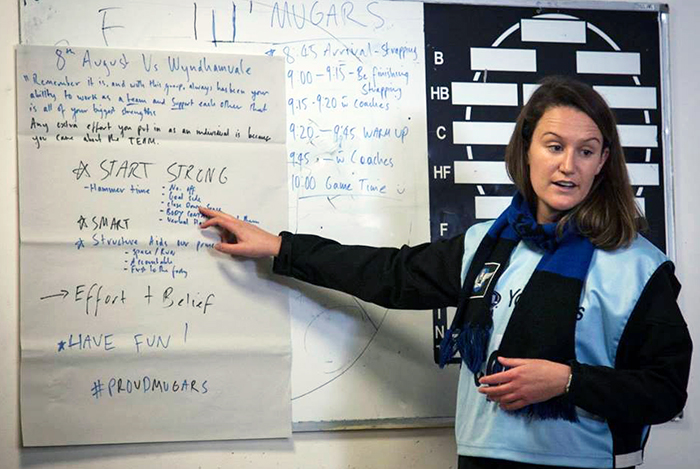 Bridget Barker has been involved in diversity and sport for a number of years. Photo: Supplied.

How do you think sport and recreation can be best used to promote social inclusion and diversity?

I remember my time as a coach that there was a young refugee woman who had arrived two years ago, and started playing on the Australian rules football team. I asked her at the end of the season how she felt the year had gone, and she said that "playing football is like playing with family". I think that beautifully encapsulates the power of sport - had she not been able to participate, she may not have felt a sense of belonging and inclusion.

Another example of the power of sport has been the rise of women's AFL and I think that's because it hasn't been the norm - we're told not to use our bodies that way, when it’s incredibly empowering to tackle, bump or shepherd the opponent. It's not about being rough or boisterous, it’s about using our bodies in a strong manner.

Obviously there are still issues in Australian sport, but even if you look at race relations, Australia is being used as a platform to talk openly about the issues whereas in other sectors the issues would not receive any airtime. And with Melbourne having such a vibrant sporting scene, I see a huge amount of potential for sport as a platform for inclusion and social change.

Learn more about the Master of Public Policy and Management