Ancient objects and languages have fascinated Dr Brent Davis since he was a child. Since leaving a successful career in IT, he is determined to crack the code to deciphering Linear A, a ‘holy grail’ of the ancient world.

In 2005, Dr Brent Davis was in his 25th year of working in IT. As a linguistics graduate from Stanford, he’d been employed by fledgling company Apple in the early 80s to write programmers’ manuals for the original Macintosh computer. After becoming a senior writer and continuing in this role in Australia with other companies, it seemed that the pathway for a lifelong career in IT was set.

But that wasn’t what he wanted, or what he had planned: Davis’s real passions lay with ancient worlds and forgotten languages.

“My dad always wanted to be an ancient history teacher. He ended up being a meteorologist, but he had a huge bookshelf full of archaeology books,” he explains. “By the age of seven, I was leafing through these books and thinking, ‘that’s what I want to do’.”

So he quit his job and enrolled in graduate archaeology studies at the University of Melbourne.

Davis has never left: 15 years later, he has a PhD in Minoan ritual vessels and an undeciphered Minoan script, and is a lecturer in archaeology, ancient history and ancient Egyptian language in the School of Historical and Philosophical Studies. His position is funded through the Spencer-Pappas Trust.

Whether it’s in the object-based learning labs housing objects from ancient Rome, Greece, Egypt, Cyprus and Mesopotamia, or – more recently – via Zoom, Davis is inspiring the next generation with his love of ancient languages and objects, and what they have to teach us.

Searching for the holy grail

Davis set himself a huge task when he started his PhD: to work on analysing Linear A, an as-yet undeciphered Minoan script.

The Minoans, who lived on Crete during the Bronze Age (from about 3000 BC - 1400 BC), spoke a language that was most likely pre-Indo-European, and unrelated to any other known language (“rather like Basque is”, Davis explains). They had a syllabic writing system in which each individual sign represents a syllable, rather than a single letter.

The Greeks eventually migrated from the mainland to Crete, and by 1400 BC were in control of the Minoan administrative centres. Davis says it doesn’t look like it was an invasion; lists of workers in Crete at the time show both Greek and non-Greek names.

“When the Greeks came to Crete, they found Linear A very cool,” Davis says. “They didn’t have a writing system of their own – the alphabet hadn’t been invented yet. So they borrowed Linear A, and used it to write in Greek. They customised it a bit, but they appear to have borrowed it as it was from the Minoans, with the same signs having the same sound values.” Linear A tablet discovered at the Hagia Triada archaeological site on Crete. It is believed to be a wholly indigenous language. Picture: Getty Images

This borrowed script is known as Linear B and was deciphered in the early 1950s by architect and self-taught linguist Michael Ventris. Cracking the code of Linear B, preserved on vessels and thousands of clay tablets, revealed information about Mycenaean civilisation – although much of it was administrative, detailing inventories of people, livestock and goods.

But deciphering Linear A could reveal a lot more.

“We have inscriptions from the Minoans on ritual objects, like offering bowls and that kind of thing,” Davis explains. “So if we could decipher Linear A and read it, we would stand a good chance of learning something new about the Minoans, and maybe about their religion as well.”

This is significant because the Greeks borrowed enthusiastically from Minoan culture, adopting elements of their religion, mythology, and art forms, including pottery styles and methods of fresco painting.

“The Minoans are really at the foundation of the classical Greek culture, which in turn is one of the foundations of modern Western cultures. So learning more about the Minoans, deciphering Linear A – it’s a bit like a holy grail. It’s one of the remaining holy grails in archaeology.”

Although his PhD was completed in 2011, Davis continues his research into deciphering Linear A, and in 2019 was awarded the prestigious Michael Ventris Award for Mycenaean Studies. The award recognises the scholar who has done the most to further the cause of decipherment of ancient Aegean scripts.

A lot of Davis’s research takes place from behind a laptop, but each year – this year being the exception, of course – he spends the Australian winter months undertaking archaeological fieldwork at the site of Tell es-Safi in Israel.

“It was known in Biblical times as Gath, and the Old Testament names it as the hometown of Goliath,” he says, before adding – “which we actually find quite funny, because when we find skeletons they’re usually much shorter than we are”. 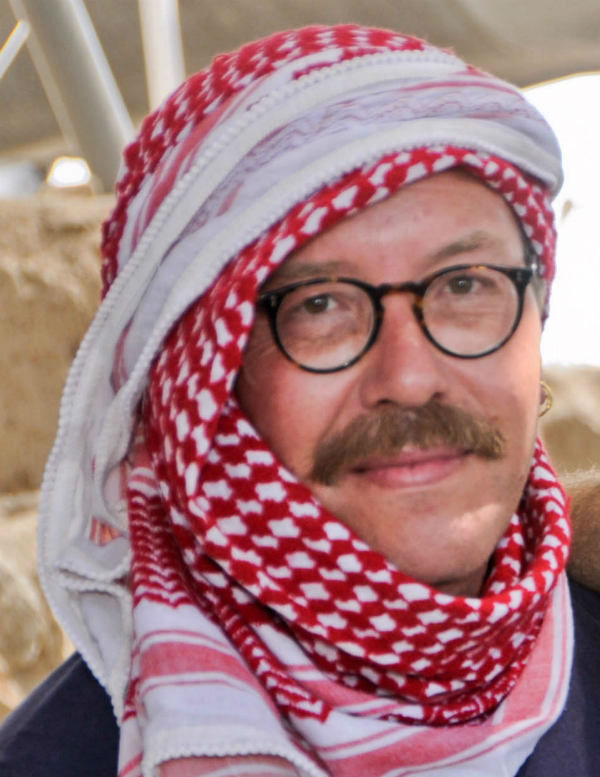 Dr Brent Davis excavating at Tell es-Safi/Gath, Israel, the site of a major Philistine city, 2013. The regional headdress called the kaffiyah is very practical in the hot and dry climate. Photograph © Richard Wiskin.

Tell es-Safi is a huge city, one of the largest pre-classical sites in the Middle East, which was destroyed at the end of the 9th century BC by King Hazael.

Interestingly, its destruction is spoken about in the Old Testament.

“The Old Testament was first written down in about the 8th or 7th century BC, and the events that occur after that period of time are fairly accurately recorded in the Old Testament, to the point that they are often actually useful archaeologically,” he explains.

A siege trench was dug around the entire city so nobody could escape, and then Hazael’s army broke through the walls, burned the city and killed everyone. The city was destroyed so completely that few people ever settled there again.

“As archaeologists, we like destruction,” Davis laughs, “because when a city is destroyed or burned, first the ceilings cave in. Then the walls fall on top of that, and all the deposits on the floor are sealed. So when archaeologists come along some thousands of years later, and dig them up, we learn a huge amount about the culture from the stuff they leave behind”.

Davis has been part of the excavating team since 2007, uncovering architecture but also items like vessels and jewellery which help form a picture of what daily life might have been like for this ancient civilisation.

“I think one of the most spectacular things that was found five or six years ago was a Philistine altar with horns on the corner, very similar to the incense-altar talked about in the Old Testament,” he says. “One of the things we’re discovering is that the Israelites borrowed a lot more Philistine culture than they told us about.

“The picture in the Old Testament is that the Philistines were uncouth and barbarian, but in fact, they were very sophisticated, highly cosmopolitan, and very interconnected with other cultures.”

It seems that it’s a classic case of “othering” – but it’s these kinds of archaeological discoveries which make people challenge their preconceptions.

“When we learn about ancient history, we learn where we came from,” Davis says. “And it gives the current world, and the current cultures in the world, context and background. Learning about history is valuable for that reason alone. That old proverb about repeating history if you don’t know it – it’s absolutely true.”

Objects might be buried under layers of destruction and words may have slept unspoken for thousands of years, but the value of what they might have to teach us – about, essentially, what it is to be human – lives on.