Ostro's Julia Busuttil Nishimura on a love of food, family and the Italian language

A love of the Italian language can lead you in unexpected directions. Julia Busuttil Nishimura – cook, published author, Italian teacher and Bachelor of Arts alum – takes us with her on a journey through studies, seasons and sunny climes. 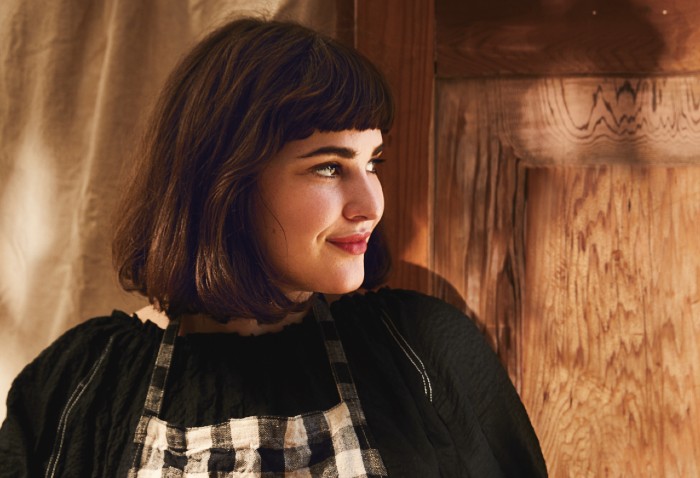 Win one of 10 signed copies of Julia Busuttil Nishimura's new book A Year of Simple Family Food. Email arts-alumni@unimelb.edu.au and tell us what your favourite meal was when you were a student to go into the draw. Competition terms and conditions.

When Julia Busuttil Nishimura took a gap year after finishing high school and decided to visit her sister in Italy, it would be the beginning of a life-long affair with Italian language, culture and food.

Having originally planned to go into either hospitality or tourism, her experience in Italy steered her in another direction.

“I just fell in love with Italy. My sister could speak Italian and I realised I wanted to be able to speak it too,” she says.

She enrolled in the Bachelor of Arts at Melbourne, studying both Italian and politics, another keen interest – although even in her politics subjects, she found herself leaning towards subjects focused on Italy.

“It was such an exciting time,” she recalls. “You never get back that time – where your world is just opening up. I felt like I was learning so much and it just felt like such a rich learning experience. I loved it. I felt purposeful.”

Since that first trip to Italy, Julia has returned many times. She studied abroad in Florence early on in her degree, and then found a way to go back to Italy over every summer. She also completed her Master of Teaching at the University of Melbourne and taught as an Italian teacher for five years, until a burgeoning side-career as a cook and writer led her to focus exclusively on what’s made her a familiar name in homes in Melbourne and beyond: food.

Under the Tuscan sun

Anybody who’s travelled to Italy in summer and eaten slices of prosciutto with the ripest of cantaloupe or tomatoes warm off the vine won’t be surprised to learn that Julia’s second career was also inspired by Italy.

While she’d had her nose in cookbooks from a young age, it was while travelling and living in Italy that she started collecting recipes in a notebook.

“I lived in this small village in southern Tuscany near Albinia and Orbetello, which was in between the ocean and the mountains. I worked for a family who used to own an agriturismo – kind of like a bed-and-breakfast, but very Italian. They had a villa and they’d grow everything on the farm, and you’d cook all the produce from the farm or around the area,” she says. Julia describes a life most of us can only dream of: living amongst an olive grove with home-pressed oil on tap in the kitchen; driving down the road to pick up ricotta so freshly made it was still warm; a neighbouring wheat farm that made its own spaghetti. It was an experience, she says, that she could never have had if she’d simply been a tourist passing through.

Over the course of five sun-drenched months, Julia learned side-by-side with some of the best in the business: Italian nonne.

“One nonna lived next door, and the other lived down the road, and they were amazing cooks. I’d also be in the kitchen with the mother every day, cooking with her – and when you spend every day with someone, with a family, you learn a lot from them.”

This idyllic Tuscan existence affirmed for Julia a love of cultivating, preparing and sharing food that has always been part of her life. 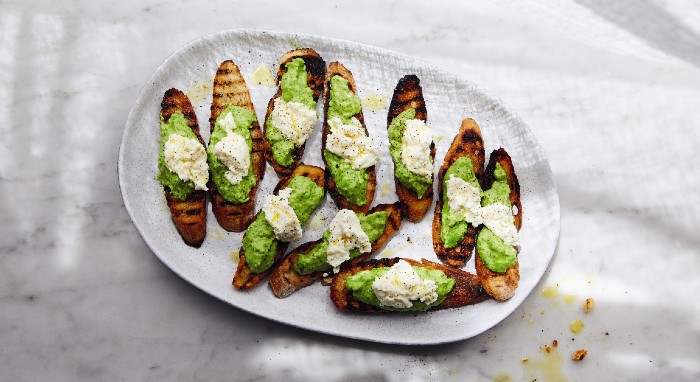 “My family is from Malta, and food is such an important part of your being. How you move throughout the day is so defined by what you're cooking and who you're cooking for. My mum worked for Qantas [then Trans Australia Airlines] back in the 70s, so I grew up with stories of her travels in Rome and Israel, and the storytelling was such a big part of my upbringing. She painted these magical pictures about how food made you feel, how it was so central to how you connect with people.”

The notebook was no longer enough. In response to many requests from friends – “How do you make that tiramisu that you made at that party? How did you make that focaccia?” – Julia started to document her recipes online. This was the beginning of Ostro, a blog which she started in 2013, and which became the basis for her first cookbook.

A Year of Simple Family Food

Now mother to Haruki, five, and Yukito, not quite one, the joy of cooking and connecting is something she is sharing with a new generation. Given Julia’s husband Nori is also a chef, it’s perhaps inevitable that food should play an important part in family life.

“When we go to the market, my five-year-old always wants to know what’s for dinner,” Julia says. “He helps in small ways – he’ll choose the pasta shapes, for example – and that kind of empowers him to be part of the dialogue around food. He’s not just being served; he’s helping make decisions. It’s all about encouraging a love of and excitement around food.”

Since becoming a mother, her approach to cooking has changed a little.

“In some ways, my idea of what is simple has changed. I think in Ostro there are some recipes that a lot of people just won’t have time to make, and I suppose my idea of the reader has changed because I’ve gone through this experience. But in a lot of ways, it’s just reinforced the importance of food and how much our lives revolve around good food and cooking. I think you have to prioritise it because it can easily become the bottom of the list of things you have to do that day.”

This ‘new reader’ now has a new book to devour, Julia’s recently released second cookbook, A Year of Simple Family Food. Shot over an eight-month period, it reflects seasonal cooking in her signature generous and rustic style. The Italian influence is certainly still there in dishes like pici with lemon mascarpone and bucatini all’amatriciana, but there’s the addition too of distinctly Japanese-inspired dishes – a reflection, no doubt, of the food that features at Julia’s own family mealtimes. 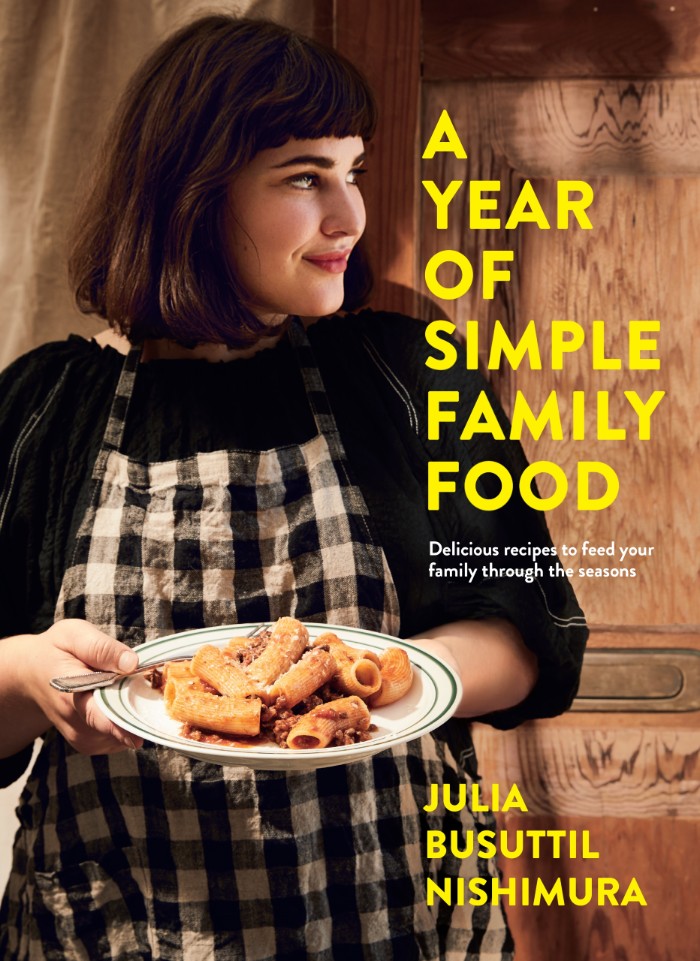 “Some of the Japanese recipes are really special, because I’m quite new to that kind of cooking,” she says. “When I was coming up with the miso chicken recipe, I was just playing around and trying some things out, and when we sat down for dinner Nori said, ‘Oh my goodness, this tastes just how my dad used to make it’.”

Although 2020 has been a lesson for us all in the precarity of making plans, there are a few things on the horizon for Julia next year. She’s re-releasing her first book Ostro, and with the ink barely dry on her second, she’s already working on a third.

As with A Year of Simple Family Food, she’ll be writing it over the course of a year, allowing ample time to test, tweak and re-test recipes, and the opportunity to make the most of Victoria’s seasonal produce. But while the savoury test recipes usually turn up on the dinner table, the sweet ones, Julia finds, are best shared a little wider. 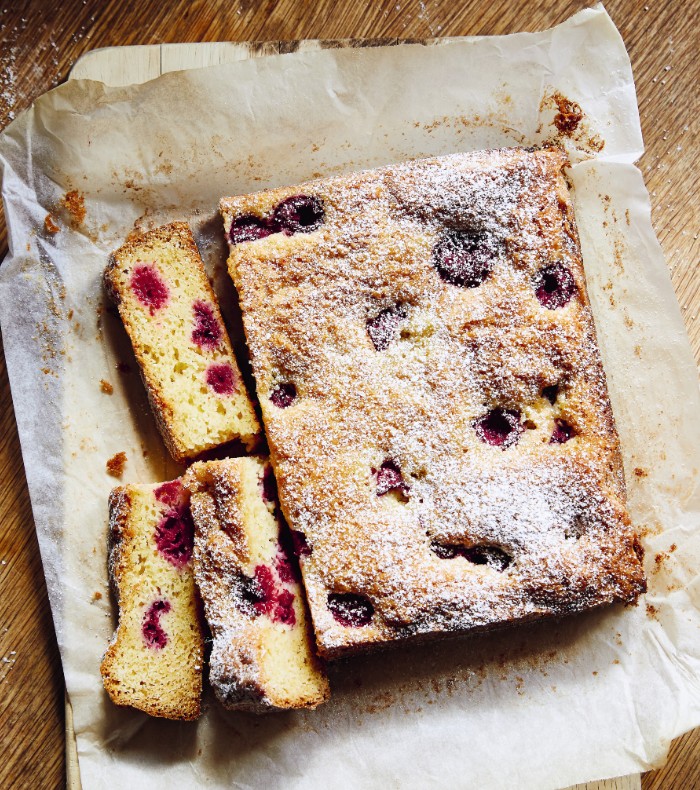 Simple butter cake with raspberries. From A Year of Simple Family Food. Image by Armelle Habib.

So if you’re lucky enough to be one of Julia’s neighbours, keep an eye out for Haruki wandering down the alleyway. He could be en route to deliver you a hefty slice of delicious, buttery, life-affirming cake.