Unpicking the myth of Testosterone Rex

Our long-held views on what causes gender differences are wrong. A new book argues it’s more complicated than we think. 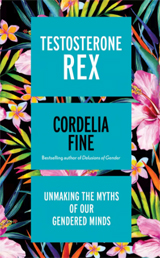 Professor Cordleia Fine's new book is a sharp corrective to the pop science of men from Mars and women from Venus. Professor Fine has been described as "the mistress of 'it's a bit more complicated than that'" and she assembles a mass of scientific evidence - across biology, anthropology, psychology and neuroscience - to disprove the myth that testosterone, or the lack of it, shapes men and women into virtually separate species.

We are spellbound by biological sex, she writes. "After all, sex categories - whether you have female or male genitals - are obviously fundamental for reproduction. Sex categories are also the primary way we divide the social world."

When a baby is born their sex is usually the first thing asked about them and it may be the last thing we remember of them - after a lifetime of their being directed down a "male" or "female" stream in school, play, work and social status.

"Perhaps it's not surprising, then, that we often think of biological sex as a fundamental force in development that creates not just two kinds of reproductive system, but two kinds of people."

Read the full article on Pursuit