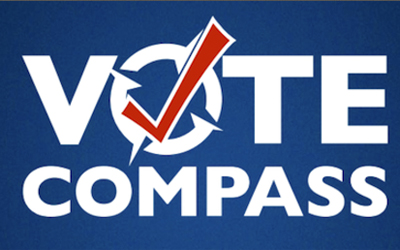 The live stream for this seminar will start at 1.05pm on Wednesday 18 September via the Digital Studio live web page.

During the 2019 federal election campaign Vote Compass received 1.62 million responses - exceeding the 1.3 million responses received in 2016 - making it the largest-ever survey of political opinion in Australia. The University of Melbourne served as the academic partner for Vote Compass during the 2013, 2016 and 2019 federal election campaigns. In this seminar Dr Aaron Martin will explain the University's role and his particular motivations for getting involved with this project. Aaron Martin was educated at the ANU, the Institute of Political Studies (Paris), Stanford University and the University of Melbourne. He returned to the University of Melbourne as Lecturer (now Senior Lecturer) in Political Science Research Methods in 2010. Aaron's research focuses on political trust, young people and politics, public opinion and policy agendas. He is the author of Young People and Politics: Political Engagement in the Anglo-American Democracies (Routledge) and, with Keith Dowding (ANU), Policy Agendas in Australia (Palgrave). He is currently working on an ARC-funded project ‘Understanding the Causes of Political Trust.’ Aaron is a member of the Steering Committee for Vote Compass and has been a Visiting Researcher at McGill, Princeton and Vanderbilt. He also sat on the Australian Electoral Commissioner’s Advisory Board on Electoral Research.