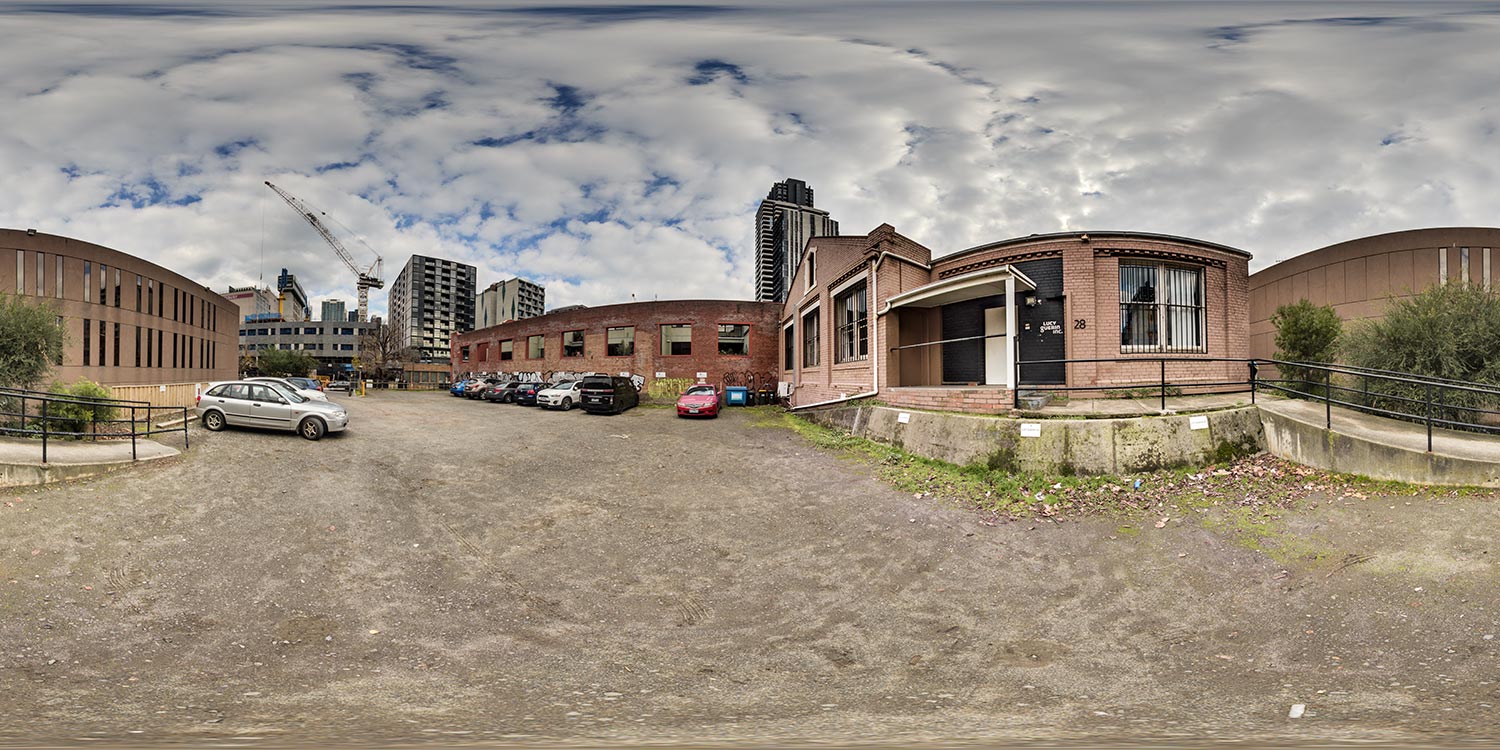 Entrance to the former Lucy Guerin Inc studio at 28 Batman St, West Melbourne, as seen in June of 2018

Welcome to the former West Melbourne headquarters of Australian contemporary dance company Lucy Guerin Inc. You can explore the studio by hovering over the navigational drawer at the top left of the page. Click on your chosen location to see a 360-degree view of the space. You can also navigate between locations by clicking the arrows at the bottom left of the screen.

By clicking on the icons you will be given information about the history of the building, the company and the work that has been made here. Within each pop-up window there are a number of tabs you can access through the explorer bar at the top of the page.

The images, videos and audio material are drawn from the Lucy Guerin Inc archives, which you can explore in more depth at the Theatre and Dance Platform, University of Melbourne Library.

Map showing the locations of the Lucy Guerin Inc studios since 2002.

Lucy Guerin Inc moved to its West Melbourne studio space from the company's original home in a small studio at 57 Miles Street, Southbank, in 2006.

The new venue is larger and also offers more security. The building at 28 Batman Street is subject to a demolition clause and given the rapid redevelopment of West Melbourne there’s no telling how much longer the little hall at 28 Batman Street will be left standing. 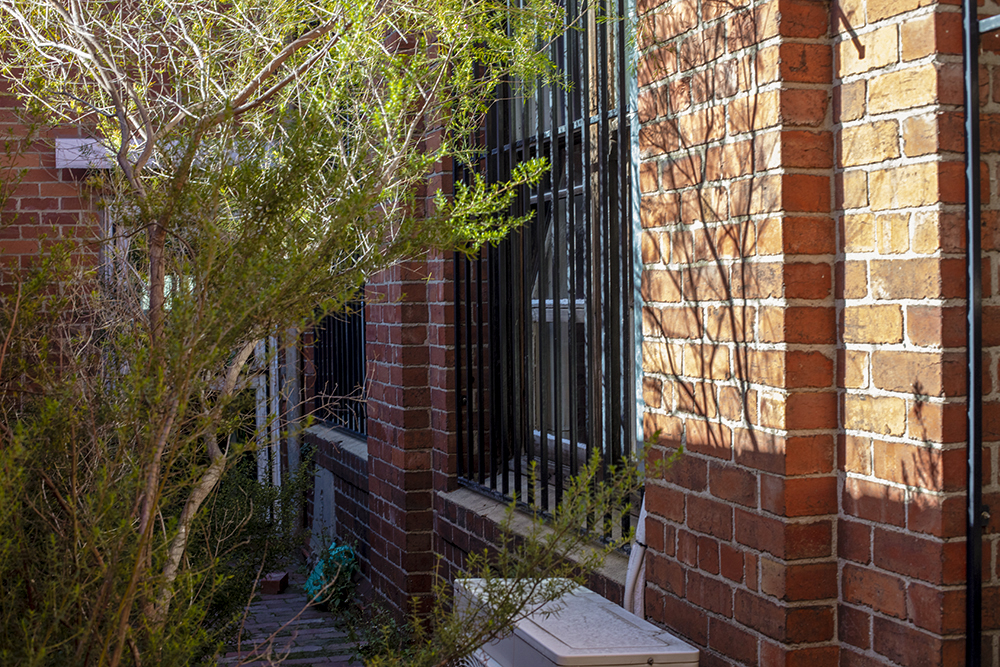 The narrow courtyard at the rear of the building. The recital hall is on the right, the administrative offices are through the door at the opposite end of the yard. There is also a water feature.

The four-room red-brick hall with vaulted timber-panelled ceilings was previously an Anglican Sunday school, part of the complex of buildings associated with St James Old Cathedral on the corner of Batman and King Streets. It has also been an Anglicare call centre and a graphic design studio.

Dance studios often take up residence in industrial or warehouse spaces in the inner city. Lucy Guerin's company is no exception, having moved from south to west to north of the central business district. 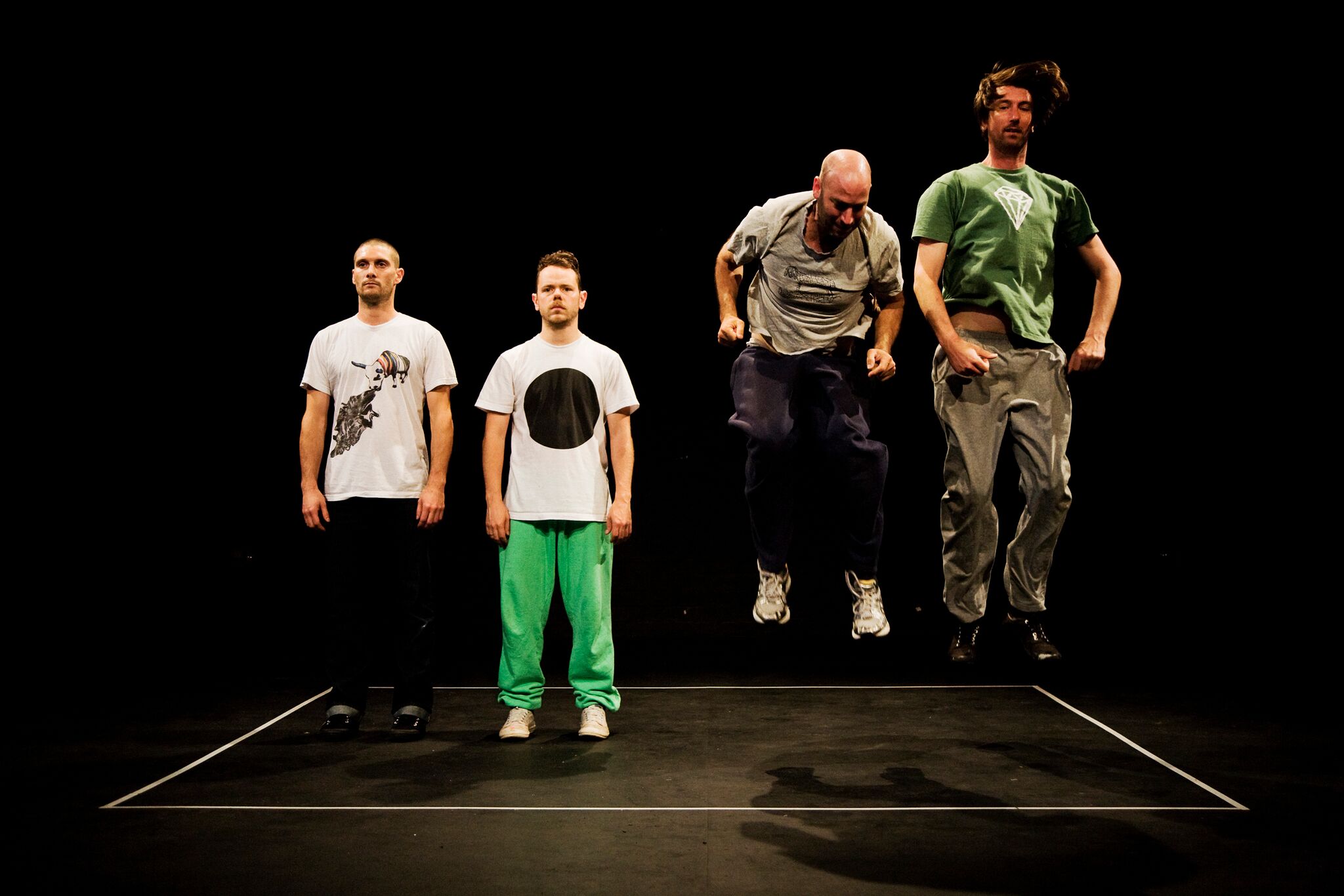 Lucy Guerin Inc was established in Melbourne in 2002 not only as a vehicle for Lucy Guerin to create new dance works but also to tour them – both nationally and internationally. The company has one of the busiest schedules among contemporary dance companies in Australia with new and repertoire works regularly touring through North America, Europe and Asia. Guerin’s work has always appealed to a broad international audience. Her first steps as a choreographer were taken in New York and she won a coveted Bessie there in 1996 for Two Lies. Also in 1996 she toured Solemn Pink and Incarnadine to the Rencontres chorégraphiques internationales de Seine-Saint-Denis in France, where she won the Prix d'auteur.

Map showing the cities where Lucy Guerin's Weather (2012) has performed. From the Theatre and Dance Portal.

More recently, works such as Structure and Sadness Untrained, Weather, Conversation Piece and Attractor have crisscrossed the world, appearing at major events along the way such as the Jacob’s Pillow Dance Festival in the Berkshires, the Noorderzon Festival in Norway and the Aarhus Festival in Denmark. In 2017 alone the company performed 42 shows in 10 cities around the world.

In the map above you can see the tour itinerary of Lucy Guerin's Weather (2012). Find out more about Weather's European and North American tours and view a selection of souvenirs. 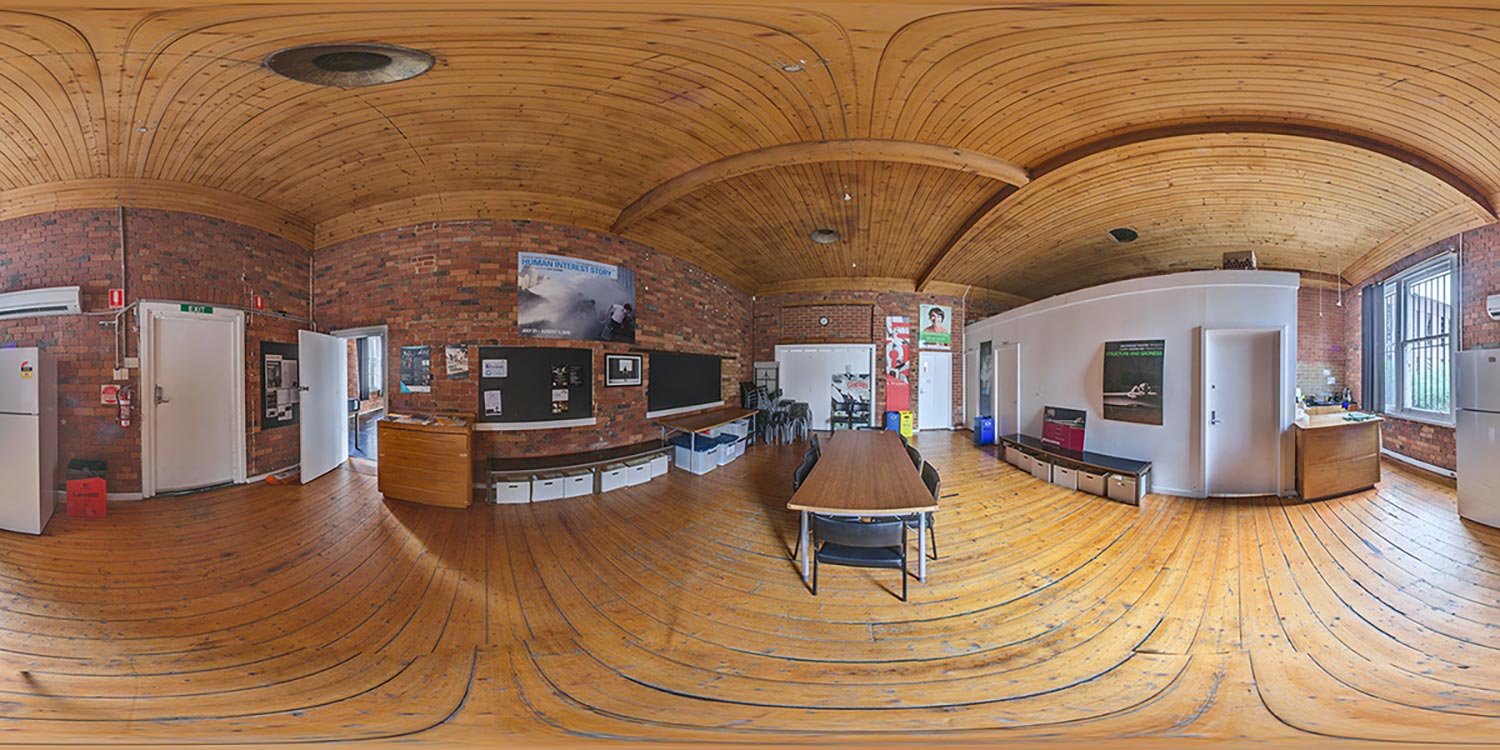 The West Melbourne studio was not only a rehearsal space and administrative base for Lucy Guerin Inc. It was also the centre of a community, with people coming and going from morning until late at night. The venue hosted a busy schedule of dance and yoga classes taught by current and former company members and guests. It provided a space for workshops, masterclasses, artist talks, forums, discussion groups and showings by emerging artists. And it was also available for hire for rehearsals. 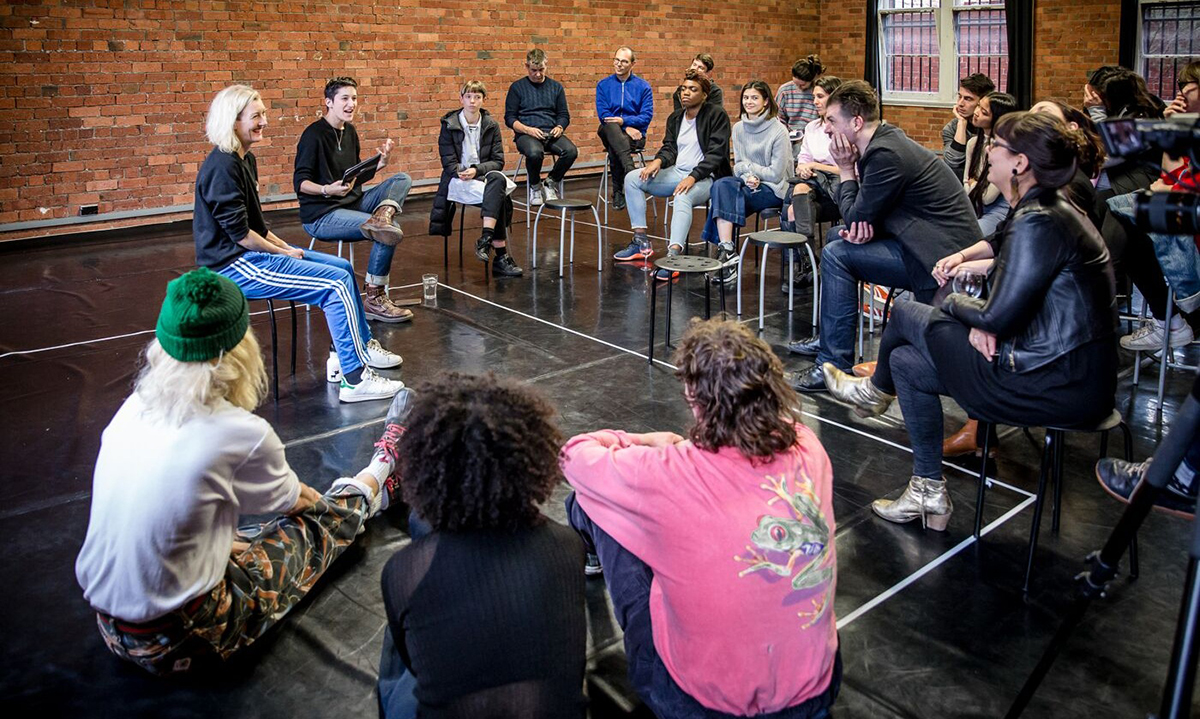 Lucy Guerin Inc used its West Melbourne base as a venue for programs aimed at sharing knowledge and resources within the dance community. Such programs included a series of residences allowing emerging choreographers to make new work and the appointment of an annual resident director. Many of these activities continue at the new WXY Studio space in North Melbourne. Human Interest Story was commissioned by the Perth International Arts Festival and the Malthouse Theatre in Melbourne where it premiered in 2010. It's an ambitious work that riffs on the affective impact of news media on our daily lives. Does the deluge of information about the world coming at us from all sides make us more connected or more empathetic? Or does it only desensitise us to the suffering of others? 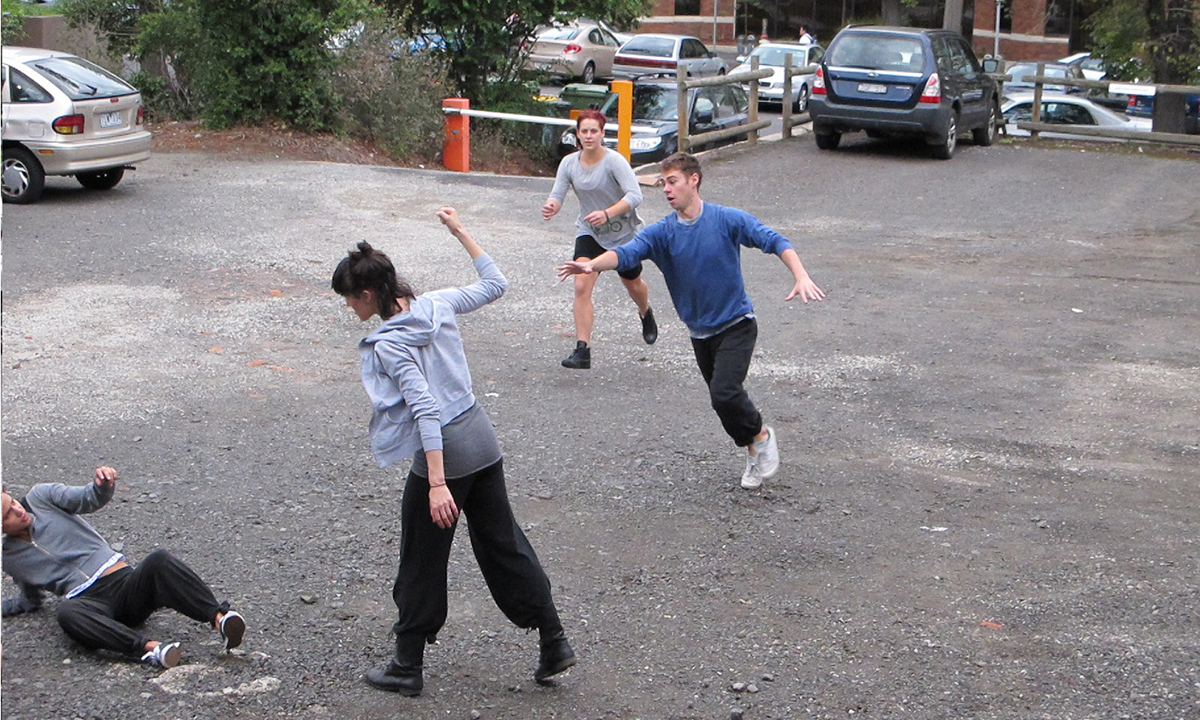 From an informal photoshoot at LGI Studio.

While developing the work, Lucy Guerin and her dancers explored every inch of space at the West Melbourne studio, even venturing into the carpark. Human Interest Story is a large-scale work that references big stories such as wars, street protests and natural disasters. But it also touches on the lighter side of the news – celebrity gossip, fads and fashions. Among other unusual features the work included a special one-off newscast with SBS newsreader Anton Enus reporting on the personal feelings and mundane events of the ensemble. 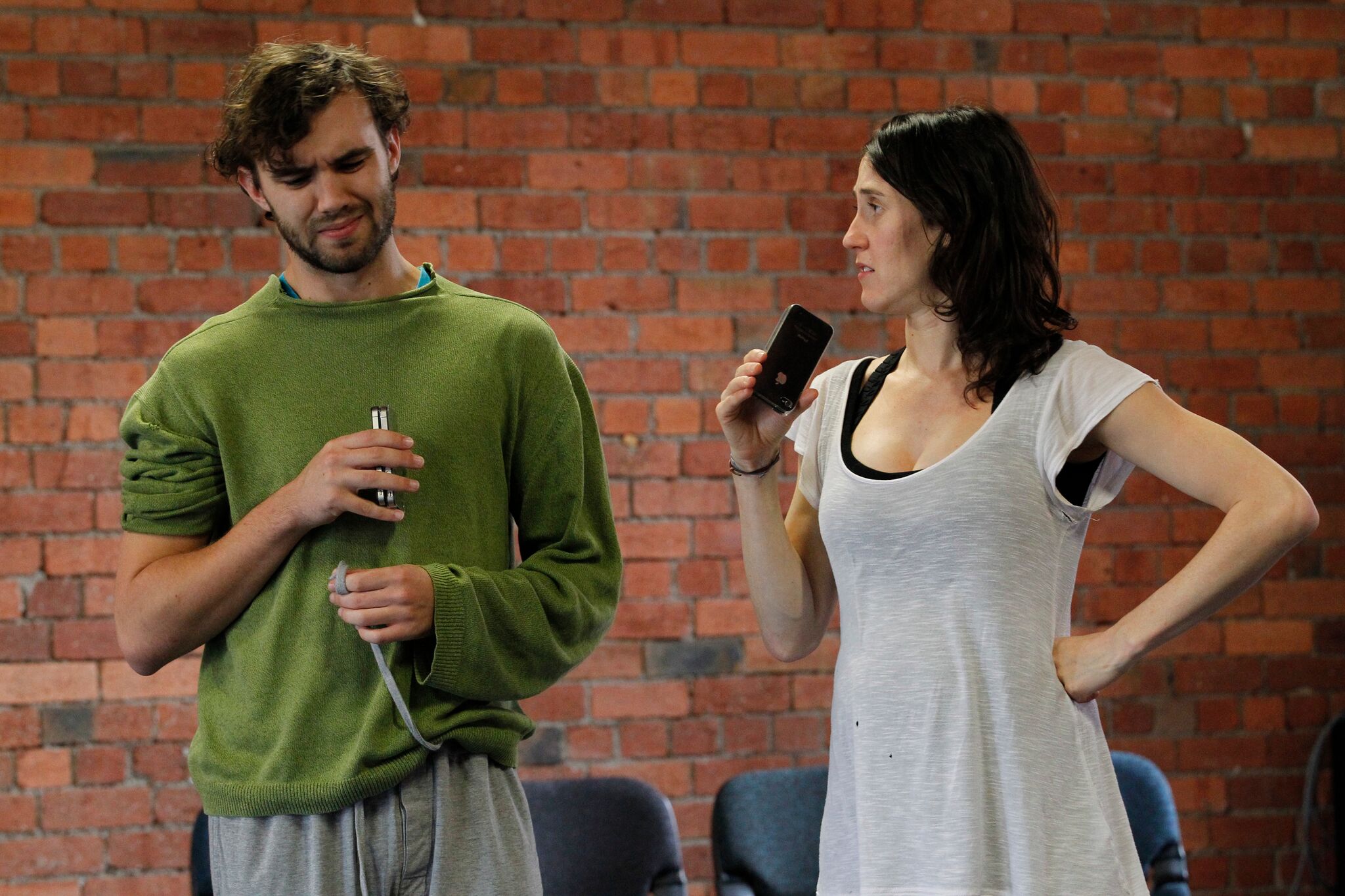 Lucy Guerin has always looked for ways to refresh her choreography and to make her work relatable to new audiences. For Conversation Piece, which premiered in 2012, Lucy Guerin was invited to make a work that involved dancers and actors. A prominent feature of the work was its use of the ubiquitous iPhone. The phones were used to play music, record conversations and even synthesise musical instruments.

Recording of the unscripted and spontaneous conversation used in the performance of Lucy Guerin's Conversation Piece at Belvoir, 15 September 2012. Theatre and Dance Platform.

In bringing together the two groups, Guerin developed a creative process that began with spontaneous conversations. These conversations, different every time, were the core of the show and informed subsequent interactions between dancers and actors. You can hear an excerpt from one of these conversations featuring Rennie McDougall, Alisdair Macindoe and Harriet Ritchie in the media player above. 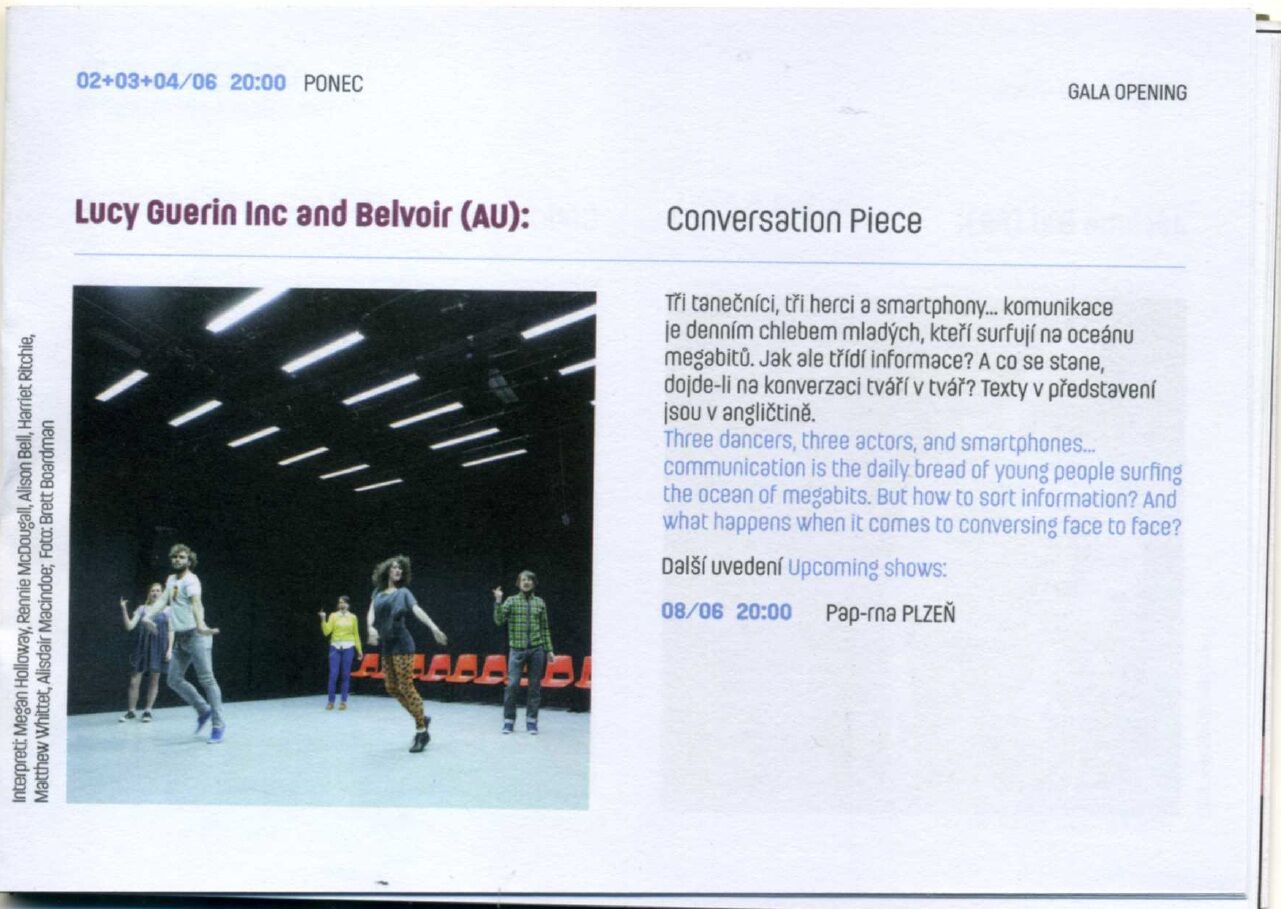 After seasons at Belvoir in Sydney and Arts House in Melbourne, the work has since toured to the Czech Republic and Scotland.

Lucy Guerin speaking about Structure and Sadness in front of the West Gate Bridge in 2011 to promote the company's tour to Edison Theatre, St Louis. Theatre and Dance Platform.

Structure and Sadness is inspired by the tragic West Gate Bridge collapse of 1970. Choreographer Lucy Guerin researched the disaster extensively and used engineering principles like tension, structural strength and gravity to develop a unique movement vocabulary. The dancers push, pull and balance on objects and each other, and even build a large structure that eventually comes crashing down. 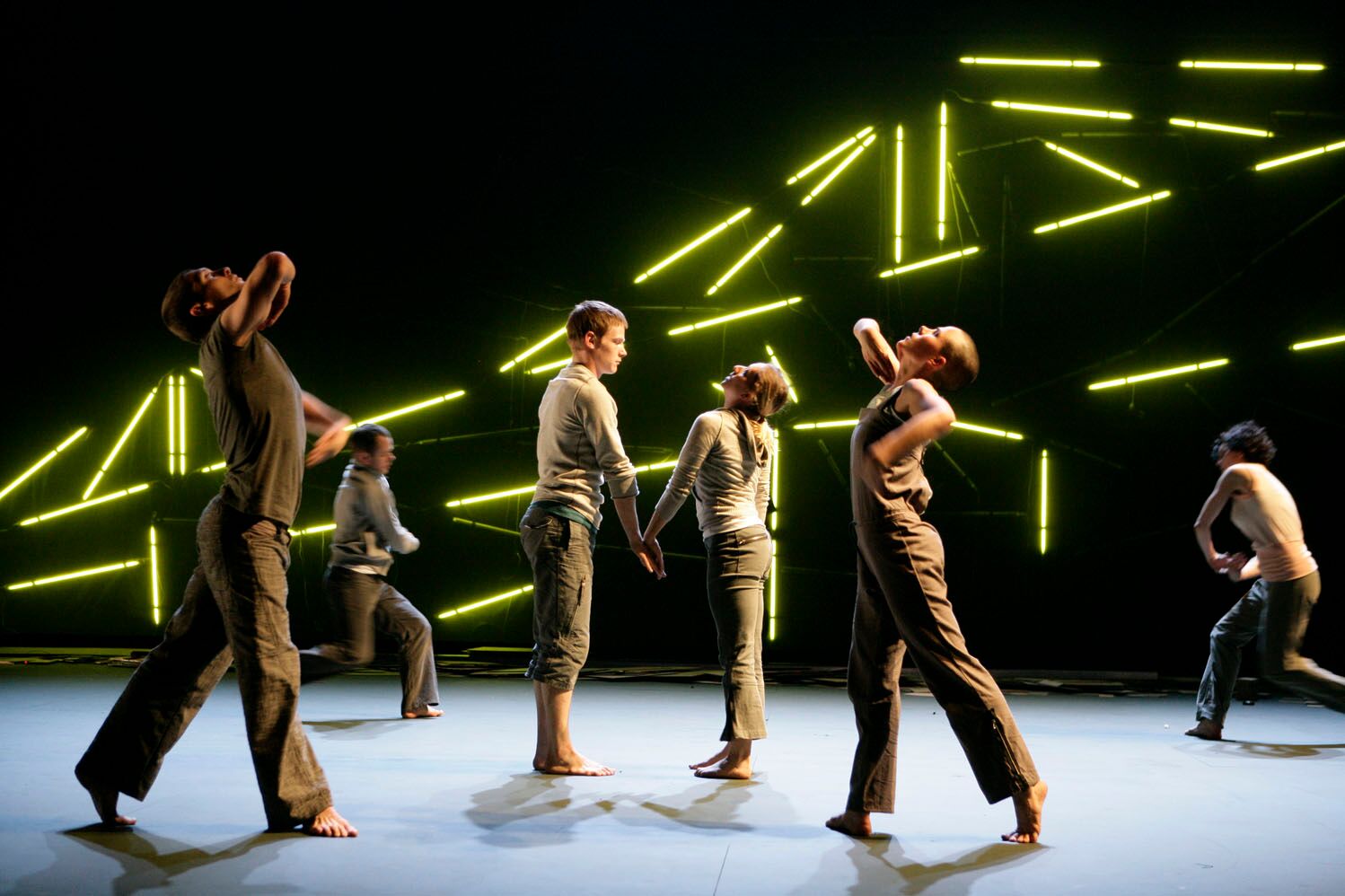 Article about a Victorian government touring grant for Lucy Guerin Inc enabling the company to take Structure and Sadness to the US. Theatre and Dance Platform.

After performances across Australia, Ireland, Germany and the United States, Lucy Guerin and company were awarded a grant from the Victorian Government, which took the work to Edison Theatre in St Louis, Missouri, and the Walker arts Center in Minneapolis in 2011.

It was performed in Minneapolis just four years after the I-35W Mississippi River bridge collapse, a disaster that killed 13 and injured 145. This gave the work powerful new significance and underlined its ongoing relevance. As the Minnesota Post noted at the time - all that rises must someday come down. 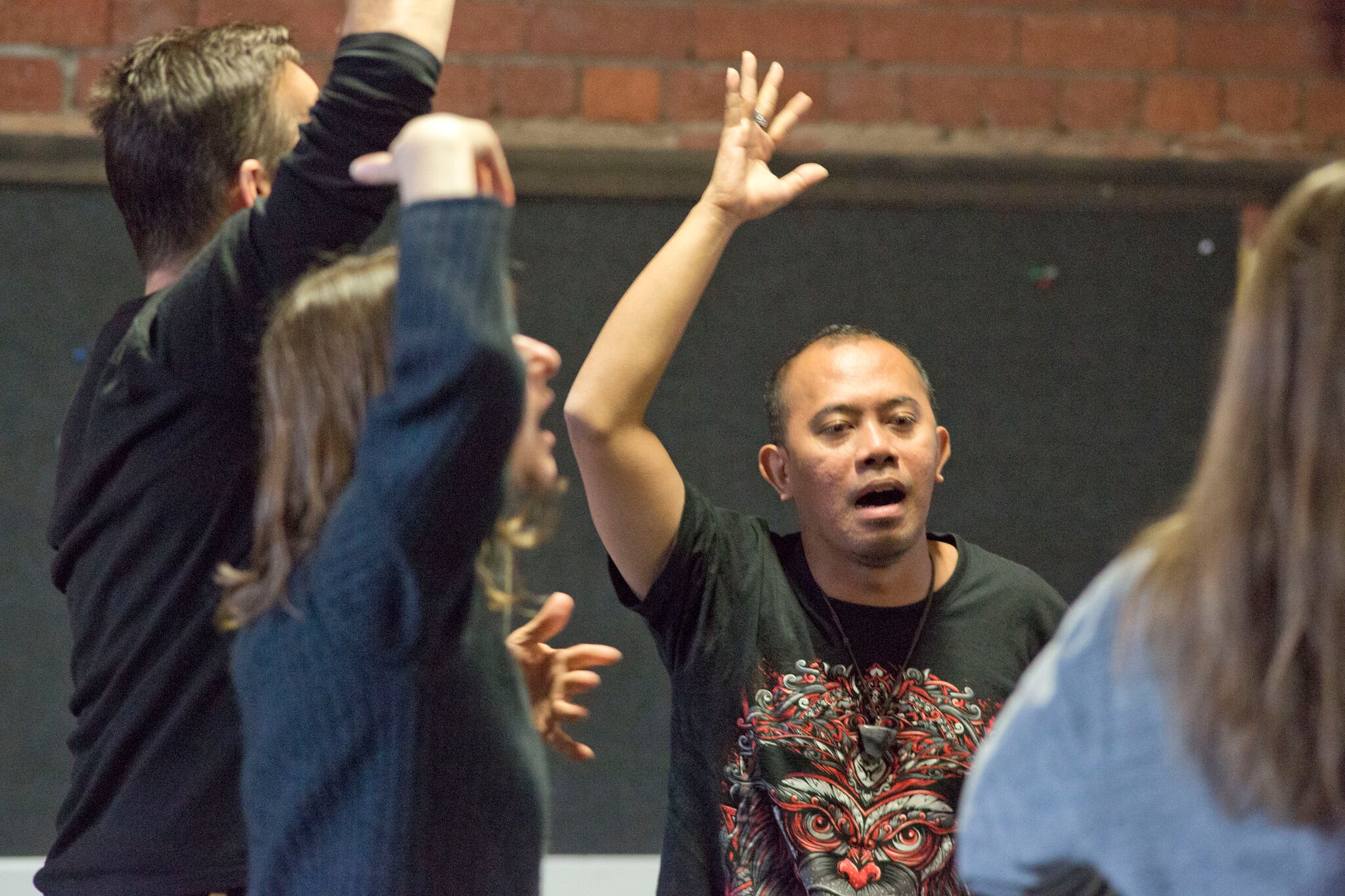 Over the years, Lucy Guerin has collaborated with a range of artists across multiple disciplines. From visual artists such as Michaela French who provided projections for Aether (2005) and the video material for Melt (2005) to renown Japanese singer, composer, multi-instrumentalist and sound artist Haco who provided the soundtrack to Corridor (2008). Lucy Guerin has worked with composers and sound designers such as Robin Fox, Oren Ambarchi, Jethro Woodward and UK multimedia artist Scanner (Robin Rimbaud). With the latter she created Tomorrow (2016), a work commissioned by Rambert in London, and Split (2017), which premiered at the Dance Massive Festival in Melbourne. 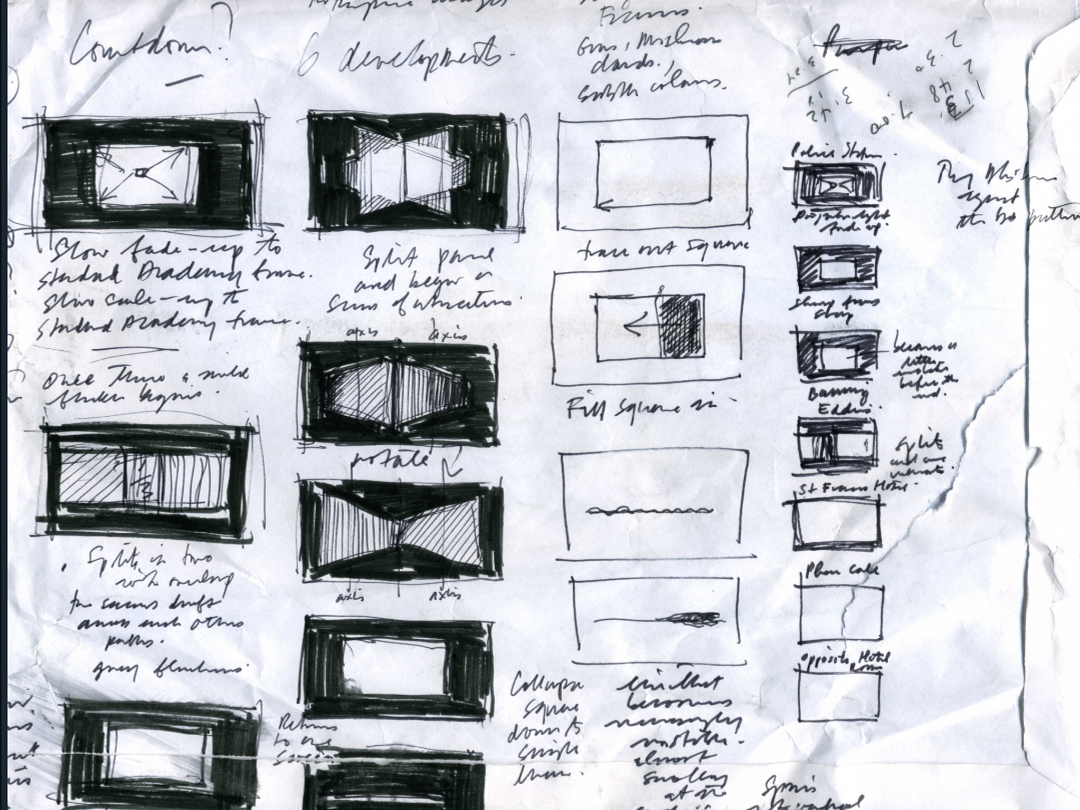 Set design sketch by Robert Cousins for Motion Picture (2015). Sketch made on the back of an envelope.

Early in her career the production and design elements in Guerin’s work were relatively minimalist. Since forming Lucy Guerin Inc, however, she has experimented with larger ensembles and more elaborate settings. In that time she has collaborated with the likes of visual artist David Rosetzky and interior designer and architect Donald Holt. Guerin has collaborated with a number of outstanding costume designers over the last two decades, including Harriet Oxley, Shio Otani and Robert Cousins. This sketch is one of Cousins' designs for Motion Picture (2015). Having a space of her own has allowed Lucy Guerin to experiment with new ideas in a freedom and fullness that would have been impossible if she was reliant on hired studios and competitive residencies. Having a permanent base in West Melbourne has also allowed her to develop more rigorous training regimes for her dancers while developing new work.

The LGI Studios in West Melbourne were the site of some weird and wonderful movement experiments, not only involving the body but also a wide range of multimedia and design elements. Indeed, some of Australia’s most iconic contemporary dance works were first workshopped here. In this clip of a rehearsal video for Corridor (2008) you can see the hall as it appears when the old canteen windows are unboarded. 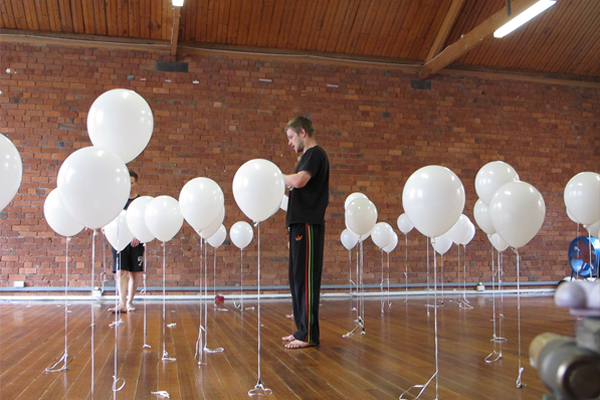 During the development of Lucy Guerin's Weather, the ensemble tested the dynamic qualities of plastic bags and balloons using hairdryers. Other items that Guerin brought into the studio include a confetti cannon, large fans and a snow machine. It was all part of her search for ways of making the air itself visible on stage. In the end, only the plastics bags made it to opening night.

A Room of Her Own The annual Pieces for Small Spaces series offers both emerging and mid-career choreographers the opportunity to make short, site-specific work in the LGI studio. Through this series, guest artists have explored the intimate aspects of choreographic work through choices of lighting design motifs, use of the gaze, idiosyncratic ‘movement’, vocalisation and changes in tempo. Invite to Pieces for Small Spaces 2013.

Pieces for Small Spaces was inaugurated in 2005 while the company was still at its Miles Street base, a much smaller studio space. The annual program continued at the larger West Melbourne studio, although it kept the original name. Almost seventy emerging and independent choreographers have participated in the program, along with many more dancers and other collaborators.

An excerpt of Kristy Ayre performing “Rabbeat”, choreographed by Kristy Ayre and Jo Lloyd at Pieces for Small Spaces 2008.

Pieces for Small Spaces continues at the premises in North Melbourne. Choreographers are offered space to rehearse, mentorship from Lucy Guerin and the company’s executive producer, as well as basic production, administrative and financial support.