The Lost Plays Database is a wiki-style forum for scholars to share information about lost plays in England, 1570-1642; its purpose is to add lost plays to scholarly discussions of early modern theatrical activity. 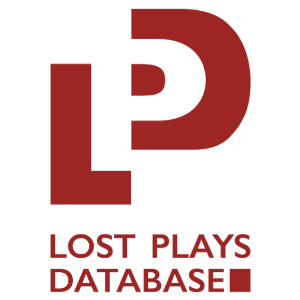 Our picture of the English Renaissance theatre (c. 1570-1642) has been shaped exclusively by the plays that were printed and have survived, but at least 744 plays have been lost (or exist only in manuscript fragments) from the London commercial theatres alone. The Lost Plays Database (LPD) is a wiki-style forum designed to allow scholars to contribute snippets of knowledge or conjecture about probable sources or storylines, genres, authorship, and theatrical provenance for the lost plays of the English Renaissance. Collectively this information provides a wealth of data for scholars interested in repertory studies, the history of playhouses and playing companies, Renaissance audiences, and playwrights of Shakespeare's day.

Founded by David McInnis and Roslyn Knutson in Melbourne in 2009, it is now hosted by the world's leading Shakespeare research institution, the Folger Shakespeare Library in Washington, DC. The New Oxford Shakespeare: Authorship Companion (2016) recognises the site as the authoritative "repository of scholarly knowledge about these plays" (422). The LPD currently boasts a distinguished editorial board of theatre historians from the UK, US, Canada and Australia and c.40 international collaborators from Yale, Harvard, Toronto, Oxford, King's College London, and elsewhere.

This research on lost plays has been supported by an ARC Discovery Project grant ('Insights from the Invisible Drama: Shakespeare, Lost plays and Theatre History, circa 1585-1613'), by the Folger Shakespeare Library (who awarded David McInnis a short-term Fellowship, 2011, and who have hosted the site since 2018), the Shakespeare Association of America (Research Travel grant, 2012), and by a Dyason Fellowship, 2012-13 (to facilitate international collaboration between McInnis and Knutson).

In 2016, David McInnis was awarded the Max Crawford Medal by the Australian Academy of the Humanities, primarily for his work on lost plays. Read his article for the Academy’s journal, Humanities Australia.

A current list of the books, articles, chapters and notes arising directly from work conducted for the LPD.