Dr Jeff Crisp (Refugee Studies Centre, Oxford University) presented the key address, titled ‘Global Refugee Policy: Where are we heading?’. The public address was followed by a panel discussion among three speakers who have had direct experience of the impact of Australia’s policies in the Asia Pacific: Behrouz Boochani, Sahar Okhovat and Hoda Afshar. 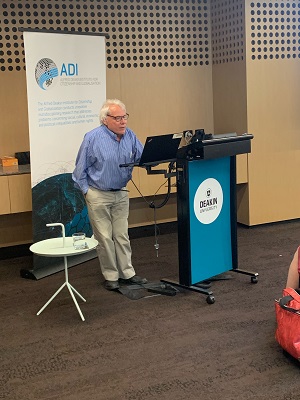 An audio and visual recording of the public forum is available on the Policy Forum web page. Behrouz Boochani is a Kurdish-Iranian journalist, scholar, cultural advocate, filmmaker and author. He holds positions as Adjunct Associate Professor in Social Sciences at the University of New South Wales, and as Visiting Professor at Birkbeck Law School. He was held as a political prisoner by the Australian government in Papua New Guinea for more than six years. His book No Friend but the Mountains: Writing From Manus Prison (Picador 2018) has received numerous awards including the 2019 Victorian Prize for Literature. Boochani has won an Amnesty International Australia 2017 Media Award, the Diaspora Symposium Social Justice Award, the Liberty Victoria 2018 Empty Chair Award, and the Anna Politkovskaya award for journalism. He is also co-director of the feature-length film Chauka, Please Tell Us The Time, a collaborator on Nazanin Sahamizadeh’s play Manus, and associate producer for Hoda Afshar’s video installation Remain. Behrouz graduated from Tarbiat Moallem University and Tarbiat Modares University, both in Tehran; he holds a Masters degree in political science, political geography and geopolitics Boochani is currently residing in New Zealand.

Hoda Afshar (born 1983, Tehran. Iran) lives and works in Melbourne. She is a visual artist and also lectures in photography and fine art. Hoda’s work has been widely exhibited locally and internationally and published online and in print. Her work is also part of numerous private and public collections. Through her work, she explores the nature and possibilities of documentary image-making. Working across photography and moving-image, she considers the representation of gender, marginality and displacement. Recent exhibitions includes Lahore Biennale (LB02) in Pakistan (2020), Remain, UQ Museum of Art in Brisbane (2019), Beyond Place, Museum of Photographic Arts, San Diego CA, USA (2019), Primavera 2018, Museum of Contemporary Art, Sydney and Waqt al tagheer: Time of Change, ACE Open, Adelaide (2018). In 2015, she received the National Photographic Portrait Prize, National Portrait Gallery and in 2018 won Bowness Photography Prize, Monash Gallery of Art, Australia. Hoda is represented by Milani Gallery in Brisbane.