6:15 except where noted otherwise.

Online via Zoom. Email andrewws@unimelb.edu.au for the Zoom link for each meeting.

Forms of Argumentation in the Medieval Liturgical Commentary

In his Missarum sollemnia, Joseph Jungmann condemns the late medieval liturgical commentary. He criticises Honorius Augustodunensis’ liturgical-exegetical work as ‘a bewildering wealth of variegated meanings, to which one could scarcely apply the title of explanation’, says that Sicard of Cremona ‘wanders along the same pathway, but adds to the confusions with a plethora of quotations’ and that ‘allegorical interpretation of the Mass ... went awry in the late medieval period.  Elements of different types of explanation were thrown together … In the last analysis, all that was needed was a little imagination to invent more arbitrary explanation for the various liturgical details which were already explained quite arbitrarily.’

Making Sense of the European Marriage Pattern: Christianity, Manorialism, the Representative Principle and the Out-of-Europe Expansion

Ever since demographer John Hajnal’s seminal 1965 article “European Marriage Patterns in Perspective”, scholars from a range of disciplines have sought to understand where the European marriage pattern (EMP) came from and what its implications have been. Historian Peter Laslett identified four key features of the EMP: married couple families, relatively late age of female marriage, minor age differences between spouses and the presence of servants who were recognised members of household but not family members. There was also a high rate of unmarried and never-married adults.

Medievalist Michael Mitterauer has recently argued that the combination of Christianity and manorialism was crucial in the development of EMP. This paper explores further supports for Mitterauer’s thesis, including early medieval concerns over the polluting effects of incest and the Church insisting that people left wills.

The paper sketches the institutional responses to the consequent lack of kin groups encouraging the development of rich institutional framework of non-kin cooperation, unusually effective states and, via the representative principle, non-autocratic governments able to scale-up beyond the city-state.

Michael “Lorenzo” Warby is a director of Multisensory Education.

Devotions of a Lonely Duchess, or Political Positioning? Margaret of York and Her Books, 1468-1477

Margaret of York, duchess of Burgundy and sister of Edward IV of England, has been much studied as a consumer of religious texts and commissioner of manuscripts. Over 20 manuscripts have been identified, either through her arms, motto and/or signature, or through archival evidence, as having been commissioned by her, given to her, or commissioned and given to others (Cockshaw 1992). Of those, five are books she commissioned for her own use from the workshop of David Aubert in Ghent in 1475-76. Her illuminated manuscripts have attracted the attention of art historians and occupy an important place in the history of Burgundian painting. Less attention has been given to the texts they contain.

The books Margaret had made for herself are known for their sumptuous illuminations and for the fact that their content is almost exclusively religious. Wim Blockmans, in an essay in the proceedings of the symposium organised by the Getty Museum exhibition in 1990 following their acquisition of Margaret’s illuminated Visions of Tondale, argued that the books she commissioned for her own use reflect an absorption in religion stemming from increasing unhappiness and loneliness during a time when the duke was absent for long periods and having a child was becoming less and less likely. I want to propose a different way of reading her actions during this time, one which sees her stepping energetically into her role as duchess of Burgundy, representing her husband in Flanders during his absences, calculating her actions always with an eye to the advantage of the duchy (and also of her own English family) and deploying a range of techniques including public display, in which her commissioning of manuscripts and artistic objects played an important part.

“More to please than to instruct”: Eighteenth-century Responses to Chaucerian Obscenity

By the time that John Dryden published selected Canterbury Tales in Fables Ancient & Modern (1700), Chaucer’s most famous work had, for all intents and purposes, lain dormant for nearly a century. While a flurry of editions of Chaucer’s collected works had been produced between 1532 and the close of the sixteenth century, no new editions had been published since then. Alongside translations from Homer, Ovid, and Boccaccio, Fables Ancient & Modern included both Middle English and — for the first time — modern English versions of The Knight’s Tale, The Nun’s Priest’s Tale and The Wife of Bath’s Tale. In his preface, Dryden explained his choice of Chaucerian tales as follows: ‘I have confin’d my Choice to such Tales of Chaucer, as savour nothing of Immodesty’, though he also noted that, if he ‘had desir’d more to please than to instruct’, he would have included the more ribald tales of the Reeve, Miller, Shipman, Merchant, and Summoner, ‘and above all, the Wife of Bathe, in the Prologue to her Tale’.

The same publication that ushered Chaucer back into the literary limelight was also a turning point in the reception of Chaucerian obscenity (the sexual and scatological language and content that feature in those tales that Dryden deliberately excludes). This joint presentation takes a closer look at this and other eighteenth-century responses to Chaucer’s ribaldry and literary legacy, the starting point for the ongoing research project on ‘Canonicity, Obscenity, and the Making of Modern Chaucer (1700-2020)’ (COMMode) at the University of Bern.

Black men feature among the caricatured figures mocking and torturing Christ in medieval imagery. However, this now-conventional assessment has become an overdrawn generalization, as has the claim that the blackness of demons was racially derogatory, for that judgement elides allegory with actuality. Demons were painted in many colours, as seen in manuscripts of the Divine Comedy or on the walls of the Spanish Chapel, for example, and their features do not resemble African physiognomy. Regarding imagery of violent men, one basic objection is that the supposedly Europe-wide pattern was not evident in Italy, in manuscript, mosaic or mural. In general, caricature and exaggeration of human figures were rarely present in the Italian representation of religious narratives.

The central figure in Giotto’s Mocking of Christ in the Arena chapel (1303-05) seems to be an exception, strikingly black and engaged in merciless action. Yet it is neither excessive in movement nor embellished in features. Scholars nevertheless regard the figure as one encapsulating “moral deficiency,” being “demonized” and “pejorative,” to quote three publications of 2008-10. This paper modifies those assessments by investigating the visual source and pictorial effect of the figure. As Paul Kaplan recognized in 2010, though only in passing, the gesture of Giotto’s figure was inspired by the mosaic of a black man in S. Marco, Venice, to which I would add that the Paduan composition also adapts and rethinks the mosaicists’s strategy. Rather than vilified or anecdotal, the isolated figure in the Arena chapel is a powerful, pivotal character without which the arrangement and narrative logic fall apart.

The paper also considers the issue of why Giotto’s fresco was unique. There are no precedents in Italian scenes of the Passion, and the image did not set a precedent, despite contemporary, widespread admiration of Giotto. In 1971 Alistair Smart praised it as “one of the most imaginative of all Giotto’s works … the greatest single composition in the entire cycle, the Pietà alone excepted.” But that particular quality did not influence other artists, and the black figure remains an oddity, early, unprecedented, singular and impressive.

Giotto and his workshop produced other images of black men in different narratives, sometimes as incidental characters but always with the telling implication of historical and geographical accuracy regarding the religious story. The context of these examples will also be examined. 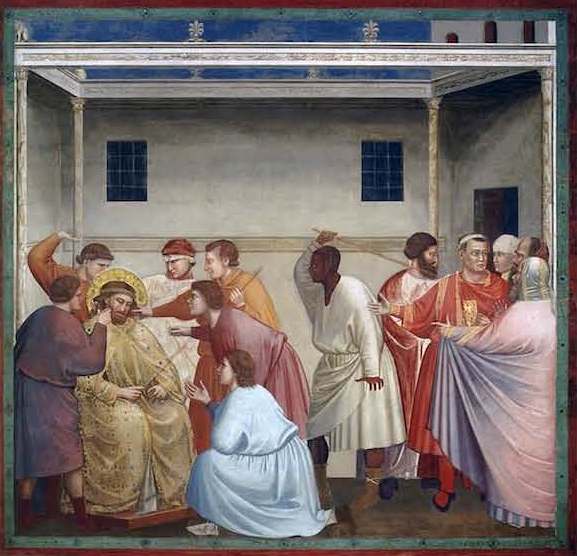 My research fellowship at the University of Melbourne from 2004 to 2007 centred around early medieval Scottish Dalriada, and particularly its stone sculpture. A decade and a half on, my understanding (and, to be fair, that of scholarship at large!) of this region has expanded considerably, and in this talk, I want to tease out the difference between a concept of Scottish Dalriada as the area of western Scotland populated by Gaelic speakers (roughly equivalent to modern Argyll), and that of the petty kingdom straddling parts of western Scotland and north-eastern Ireland. Having clarified this distinction, an examination of the documentary, topographical and material evidence for the petty kingdom of Dalraida yields interesting evidence for the composition and functioning of this polity.

Sounding Numbers in the Passions of the Soul

According to the legend it was Pythagoras who first made the connection between numbers and the acoustic relations between musical pitches. He was wandering past a blacksmith’s forge when he was attracted to the ringing tones of the different anvils as they were struck by the hammer. By experimentation he worked out that anvils of particular proportionate weights produced specific intervals, thus anvils in the proportion 2:1 produced the octave, 3:2 the fifth, and 4:3, the fourth. These first numbers, 1, 2, 3 and 4 formed the three fundamental intervals, the structural base on which Western European music and music theory stands. Plato in the Timaeus confirmed that "all nature consists of harmony arising out of numbers" and that the mathematical laws as expressed through music were fundamental not only to our understanding of the world but to human well-being. Boethius translated and transmitted these ideas to the early Middle Ages providing the basis for the thinking around the Harmony of Spheres which was to remain influential in music philosophy beyond the Baroque. In the late 13th and early 14th centuries as a result of the renovation of the Aristotelian oeuvre the connections between numbers, music and the self were further nuanced in the debates around the Passions of the Soul. Guy of St Denis was to develop the thinking of Aquinas, with perhaps the help of Peter of Auvergne, to apply specifically to music so that specific numerical proportions, through the resounding musical interval, could be shown to instigate a specific emotional state.

Book Launch: Medieval Literature and Social Politics: Studies of Cultures and Their Contexts