Congratulations to Ute, Cathie and Tim! 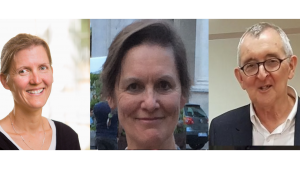 As announced by the Awards Committee:

“The nomination for the group of language testing professionals led by Ute Knoch, Cathie Elder, and Tim McNamara presents a strong case for their intervention against the government’s intention to use language tests for gatekeeping purposes. In this case, a proposed amendment to Australian citizenship legislation, including the introduction of a stand-alone English test with higher than necessary score requirements, had already been passed by one house of the Australian Parliament. The group gathered evidence on the English language needs of immigrants already working in Australia, English language requirements for immigrants to other countries, and other interpretations of the skills necessary to attain the proposed level. Based on this, they concluded that the new English language requirements were too academic in nature, too comprehensive and too high. The three language testers decided to intervene by writing in newspapers, appearing on radio and TV, and testifying before the upper house of Parliament on the matter. The proposed bill was eventually voted down in the Senate. The intervention proved to be powerful and rigorous and clearly falls within the range of advocacy activities that ILTA sought to promote through this new award. This intervention also showcases how our professional knowledge can be utilised to create a fairer society.

In the nomination report, evidence of the group’s effective intervention on the use of language tests in public policy was presented through a detailed account of the approach for the actions taken and the principles informing the approach. The report was also supported by a wide range of supplementary materials. Lessons learned from the case and challenges encountered in the process of intervention were discussed, including, for example, how to further improve communication with politicians. In so doing, the nomination serves as an instructive case study of a successful intervention in a political context and sets an example for others to follow.”

More information on this ILTA award

Read the submission 'Strengthening the test for Australian Citizenship'