A mounting COVID-19 crisis in Indonesia and concerns that Australia is neglecting its long-standing policy of constructive engagement with Asia have provided the backdrop for a high-level conference which underlined the importance of Australia’s bilateral relationship with the archipelago nation.

Facilitated by Universitas Gadjah Mada and the University of Melbourne and involving health and public policy experts from both countries, the conference traversed a sweep of issues including the pandemic, geopolitical pressure points and climate change, contending that there is plenty of room for bilateral ties to strengthen.

“We have an incredibly strong architecture,” he told the two-day conference, held online in July.

“It’s been built over many, many decades [and] withstood the highs and lows in the relationship. I’m pleased to say, we’re at a really strong place.”

The relationship’s importance will be underscored further when Indonesia hosts next year’s summit of the Group of 20 (G20) nations.

Scott pointed to the forum’s “enormous opportunity” given its timing at a critically important juncture for both global and regional economies.

However, other speakers were less optimistic in their assessment of Australia-Indonesia ties, with Professor Michael Wesley, the University’s Deputy-Vice Chancellor (International), claiming Australian foreign policy was entering “really quite concerning territory” in the Asia-Pacific region.

“For those of us who have followed and watched Australia’s positive relationships with Indonesia, ASEAN and the rest of the region … this is really a worrying and unprecedented time,” he cautioned.

“In fact, I think I would go so far as to say that, at the moment, Australia’s interests and alignments are drifting away from Indonesia, and the broader Asian region, to a greater extent than they have at any time since the end of the Vietnam War.”

Professor Wesley argued that, since 2016, Australia had stopped trying to avoid the polarising logic of competition between the US and China, and had started siding progressively and explicitly with the former.

“Australia has very actively, in my view, joined a US-led campaign to convince other countries that China is dangerous and that they need to be careful about entering certain arrangements with China …
“This means that Australia has become part of the logic that Indonesia [and] other ASEAN countries are so keen to avoid. Hence, Australia has become more diplomatically isolated, over time, from its neighbours in South-East Asia.”

“There is a lot of uncertainty about how things will develop,” he told the gathering. “The tendency in Australia to see international relations primarily through a lens of US-China relations obscures an important reality of our situation … over the past half-century, and longer, deep integration with Asia has been essential for Australia’s security and prosperity. And the most important element of that is a close and trusting relationship with Indonesia.” The spectre of COVID-19

COVID-19 had led to “the biggest downturn in a six-month period that the world has ever known,” Prof Garnaut added, but he said a heavy global downturn had not eventuated because developed countries had embarked on an unprecedented program of Keynesian fiscal and monetary expansion.

“We learned a lesson from the Global Financial Crisis. [Generally], economic policy responses around the world … helped to limit the collapse of economic activity [through a] very big increase in government expenditure financed by debt, very big monetary expansion. [T]he outcome was a quite strong rebound in economic activity.”

Strong ties between Australia and Indonesia had helped mitigate against regional isolationism, Prof Garnaut noted, while also sounding a note of concern against the growing political popularity of nations developing “sovereign capabilities”.

“Every country doing that ends up taking away what has been the main impetus for economic growth throughout the world in the past 70 years,” he said.

“The pandemic leaves the world with a big economic challenge, and [requires] a lot of close co-operation amongst the significant economies and polities of the world.

“The problems won’t be solved by China and the USA, separately or co-operating.”

The comments came during ‘Australia-Indonesia in Conversation: COVID-19 and ‘Post’-Pandemic Challenges’, a two-day conference convening experts across medicine, public policy, economics, sociology diplomacy and academia in open discussion of the most pressing issues facing the two nations. More than 20 speakers addressed four online sessions across two days of events.

The conference heard there was plenty of room for the economic relationship between both countries to grow and flourish, including from a top official of Indonesia’s Ministry of Trade.

“[Indonesia is] not the number one, or even in the top 10 [Australian] trading partners,” noted Ms Ni Made Ayu Marthini, Director of Bilateral Negotiations, Directorate General of International Trade Negotiations. “Even among ASEAN, we are not. Last year, Vietnam surpassed Indonesia as the main trading partner in ASEAN with Australia.”

For Scott, the fact the two nations aren’t yet top-10 trade partners meant there was plenty of untapped potential.

“When we think that Indonesia is going to be the world’s fourth or fifth-biggest economy by 2050, for Australia that is an enormous opportunity. Now is the time for our business sector to be building those connections and positioning ourselves.”

Trade ties that bind, and could build further

Both countries recently solidified economic ties through the Indonesia-Australia Comprehensive Economic Partnership Agreement. Coming into force in July 2020, the agreement creates a framework for Australia and Indonesia to foster economic co-operation at individual, business and community levels.

The conference heard that Indonesian exports to Australia increased by 7.6 per cent in 2020 and that total bilateral trade between both countries in the second quarter of 2020 had also increased significantly.

The most pressing issue facing Indonesia now was its COVID-19 health crisis, according to conference speakers. The country has seen a surge in cases in 2021, with official figures citing around 50,000 new cases per day in June, leading to oxygen shortages in hospitals across Java. Hospitals have faced staff shortages as workers have become sick and have at times been forced to temporarily close emergency rooms due to the crisis.

The country faces unique challenges partly due to factors including the proportion of people living in poverty – an estimated 27.5 million people as of March, 2021 – and because Indonesia is an archipelago nation comprising diverse ethnic groups. “The health crisis could clearly lead to a crisis of governance and political legitimacy,” said Dr Wawan Mas’udi, the Dean of Faculty of Social and Political Sciences at Universitas Gadjah Mada.

“[The pandemic] has widened the gap between rich and poor, especially in health access and the capacity to sustain a minimum standard of livelihood.”

Speeding up vaccine uptake would be a “game changer” for the country, according to Mr Abetnego Panca Putra Tarigan, Deputy Chief of Staff of Human Development Affairs, Executive Office to the President of the Republic of Indonesia. The government had secured more than 480 million doses of vaccines as of July 15.

“We are also aiming to escalate the target of vaccinations per day. [We reached] the highest a few days ago, at 1.3 million doses per day.”

The vexed issue of vaccines

Both Australia and Indonesia have found themselves behind the global average when it comes to the pace of vaccine rollout, epidemiologist Prof Tony Blakely outlined. He presented modelling from the Institute of Health Metrics and Evaluation, an independent population health research centre based at the University of Washington, which showed actual cases of COVID-19 could be 30 times higher than official numbers in Indonesia. The modelling estimates around 0.4 per cent of Indonesia’s population is being infected every day.

“[This] is very high. It’s about the same height it got to at the worst point for the UK interestingly. They were about 0.5 per cent per day in their last peak.”

Prof Blakely also discussed modelling that charts a range of control measures – including various types of lockdowns and vaccination rates – to estimate what might happen once Australia re-opens its international borders.

Dr Williams noted several similarities between both countries’ pandemic responses, including a focus on the pillars of public health, social protection and economic recovery, overcoming challenges in communicating with diverse communities, and how to effectively use data for decision-making.

“Together, we recognise that there is nothing ‘set and forget’ about COVID-19 responses,” she told the conference. “Our engagement has been characterised by constant bilateral communication, as well as a shared commitment, or mutual learning … and engagement.” 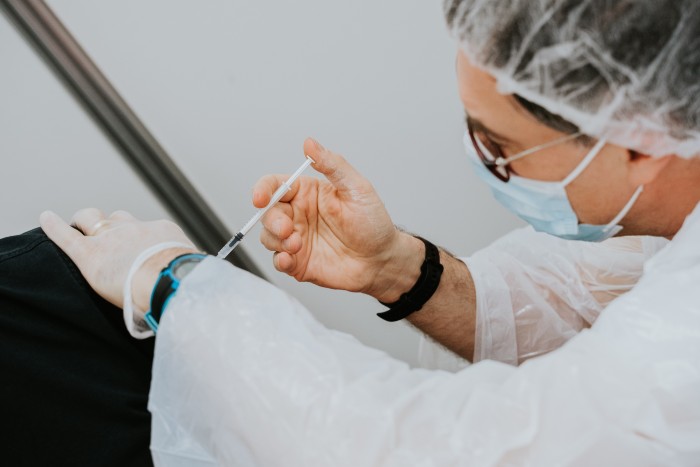 Despite far lower case numbers than Indonesia, Australia has faced its own challenges in managing COVID-19, including ongoing issues with its vaccine rollout. Picture: Unsplash

Australia plans to share 2.5 million doses of the AstraZeneca vaccine with Indonesia in 2021 and has already sent 1,000 ventilators to the country as well as 40,000 rapid-antigen test kits.

It is also providing $101.9 million in support of Indonesia’s national vaccine rollout through the $523 million Regional COVID-19 Vaccine Access and Health Security Initiative. This includes funding for vaccine procurement through UNICEF and delivery support through the World Bank, UNICEF, WHO and the Australia Indonesia Health Security Partnership. Australia has also extended a $1.5 billion loan earmarked for COVID-19 response and recovery.

Dr Williams has previously worked on pandemic preparedness at both state and federal government levels and said it was a challenge to convince decision makers of the importance of pandemic planning prior to 2020.

“Talking to national security and foreign policy circles around how realistic an infectious disease threat would be, you would see their eyes glaze over,” she reflected. “Not because of disinterest, but only that potentially because it was hard to conceive of the message … that there would be a significant disruption; it would be simultaneous in all countries. And social bonds at every level would be tested.”

Indigenous leadership in the face of COVID-19

Despite far-lower case numbers than Indonesia, Australia has faced its own challenges in managing COVID-19, including ongoing issues with its vaccine rollout. But one bright spot had been the response of Indigenous Australians.

“In doing so, these communities exercised sovereignty that they had rarely evoked but never ceded,” Ms Andrews said. “Indigenous leadership has really been able to flourish during this very complex time.

“The significance of [that] cannot be understated. The community and organisational mobilisation were swift, pre-emptive and preceded any of the Australian government’s decisions.”

Despite challenges, including early delays in supplying equipment to some communities and structural racism, Indigenous Australians had been significantly less affected by COVID-19 compared to others, she noted. As at 21-22 July when the conference took place, there had been no deaths or ICU admissions, and just 148 cases of COVID-19 reported for 800,000 Indigenous people across the country.

“This is a phenomenal result and world leading, as we are reminded of the devastating impacts of COVID-19 on other Indigenous communities around the world, such as the Navajo in the US, and communities in Brazil.”

With conference speakers having touched on everything from increasing person-to-person links among young Indonesians and Australians to opportunities for closer economic ties, deputy ambassador Scott praised the conference for having reinforced the importance of “Track II diplomacy” – diplomacy that’s undertaken outside official government channels.

“These things are important because without the constraints of governments, sometimes they can be much more free flowing, much more ambitious and new ideas percolate up to governments. It’s important that we keep working at all levels.”

Learn more about the conference