Professor Michelle Arrow from Macquarie University has been awarded the 2020 Ernest Scott prize for her book The Seventies: The Personal, The Political and the Making of Modern Australia, which examines the history of Australia throughout the decade.

The Ernest Scott Prize for History is awarded for work based upon original research which is, in the opinion of the judges, the most distinguished contribution to the history of Australia or New Zealand or to the history of colonisation published in the previous year.

This year’s judges Professor Kate Hunter (Victoria University of Wellington) and Associate Professor Paul Sendziuk (University of Adelaide) awarded the prize to Professor Michelle Arrow for her book The Seventies: The Personal, The Political and the Making of Modern Australia, which they praised as an “intensely immediate and relevant history of the 1970s [which] brings to light the astonishing politics of a remarkable decade”. 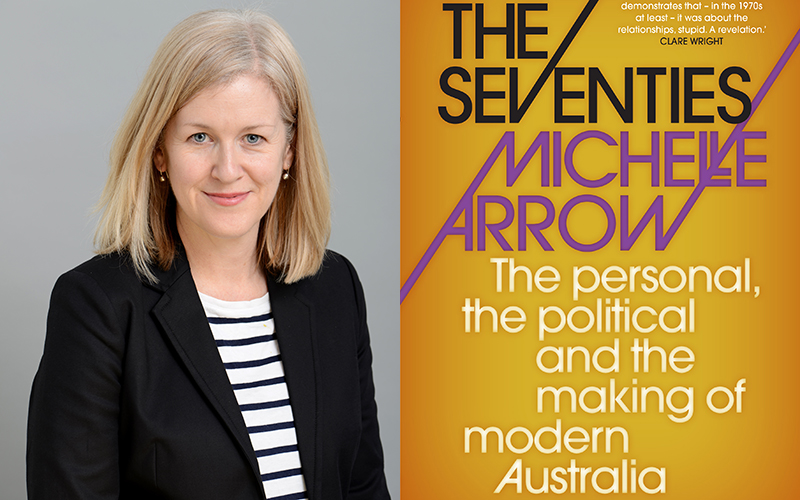 In awarding the prize, the Professor Hunter said The Seventies “restores ‘the personal is political’ to its place as a chant of a revolution: a revolution in politics and a revolution in intimate life. [Michelle Arrow] brings this aspect of the 1970s out from under the shadow of the dismissal, which has loomed so large in our national histories.”

“This book had its genesis in my curiosity about the Royal Commission on Human Relationships, which was a ground-breaking inquiry into family and intimate life initiated by the Whitlam government,” Professor Arrow explains. The Commission had been largely overlooked by historians but “offered a window onto the social change of the 1970s, and a new way to examine that history”, she says.

“The Commissioners invited the public to tell them ‘What do you think?’ about marriage, parenthood, sex, abortion, homosexuality, domestic violence, child abuse and many other issues, and thousands of Australians responded with written submissions and testimonies,” she says. “This rich archive forms the spine of the book.”

“Michelle gives us the compelling stories of all those anonymous heroes – the Australians – mainly women – who gave their intimate testimony to strangers in the hope that it would change the lives of other women and men for the better”, Professor Hunter said. “It's a story of triumph, but also of division, of agony and pathos. Michelle Arrow has delivered to us a very human history of a revolution.”

Professor Arrow said she was honoured and delighted to have been chosen as the 2020 winner, and “thrilled to have been shortlisted alongside three wonderful historians whose work I admire very much”.

At this moment of profound global upheaval, which has included the closure of libraries and archives, I think I speak for all historians when I say that I’m very grateful for the hard work of archivists and librarians, and I’m looking forward to getting back into the archives when the pandemic is over,” she says.